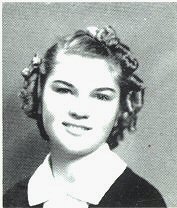 Anita Huovar in her 1939 yearbook photo.

The Issaquah History Museums aim to preserve what we call “local history” – the stories of people and events in our immediate area. But “local history” is never only local. The story of any area is always impacted by other events – regional, national, or global – and people rarely stay in just one area. We can see the intersection of local and global events in the story of Anita Huovar.

Anita Huovar grew up in Issaquah during the 1920s and 1930s. At this time, Issaquah was a rural farming community of less than 1,000 inhabitants. In this era before the floating bridge, going to Seattle required a drive south of Lake Washington. Nearly all of the town’s residents knew each other, and many were related by blood or marriage. Born and raised in rural Issaquah, Anita Huovar wouldn’t have surprised anyone by attending college, marrying, or having a career. By the time she graduated from high school, more and more young women were going to work. But Huovar’s path took a decidedly international turn, which made her quite unusual.

Huovar was born to Finnish immigrants John and Helja Huovar in Issaquah in 1921. Her father worked in the Newcastle coal mines for a time, and later found steady work with the logging companies and lumber mills that surrounded Issaquah. The Huovar family was active in the community, judging from coverage in the Issaquah Press. Her mother was a member of Issaquah’s Relief Committee, a group that worked to provide assistance for those hard-hit by the Depression. The Huovar family often hosted meetings of the Finnish National Club at their home. At the 1931 Community Church Christmas party, Anita’s recitation of more than 50 Bible verses from memory was called an “exceptional feature” by the Issaquah Press, and earned her an engraved Bible. The 1939 Issaquah High School yearbook claimed that Anita would be remembered by her nickname “Sunny,” and for her good grades. After graduation, Anita earned a teaching degree at the University of Washington, and returned to Issaquah High as a teacher from 1944 until 1949.

In 1949 her path diverged sharply from those of her peers when she took a teaching job in Yokohama, Japan. While working there, she met Kevin Carroll. Carroll worked on foreign aid programs within the Department of the Interior. The two wed in 1952, and began their married life together in Honolulu. In 1955 Kevin Carroll’s work with the USAID sent him to the Balochistan region of southeastern Iran. Anita accompanied him.

Most Americans back home had little notion of daily life in the Middle East, including Iran. Notions of the region were shaped by popular culture representations that featured harems, belly-dancers, and sand-filled desert. Few of Anita’s friends of family members would have been aware of the political forces that would shape the Carrolls’ fate.

Between 1951 and 1953, the CIA conspired to overthrow Iran’s elected prime minister and put the Shah in his place, as detailed in CIA documents highlighted by the New York Times in 2000. This caused a great deal of anti-American sentiment within Iran. Residents of the Balochistan region, where Kevin and Anita Carroll would live, were particularly displeased with the Shah’s regime. Balochistan had at one time been a semi-independent state; in the 1950s the Baloch tribes were brought under the rule of the ethnically Persian Iranian government, led by the Shah. The Shah’s regime sought to forcibly assimilate the Baloch by limiting education, banning traditional attire, and outlawing use of the Balochi language. The Balochis actively resisted the Shah’s rule, making Balochistan a dangerous place for an American to be.

Kevin Carroll and Anita Huovar Carroll became entangled in this ethnic struggle between the Persians and the Balochis. On March 24, 1957, the Carrolls and another American, Brewster Wilson, were en route to Chahbahar when Balochi resistance fighters opened fire. The Americans returned fire, but were soon overtaken. Kevin Carroll and Brewster Wilson were killed and left at the scene. Anita Huovar Carroll was taken from the scene, alive. Government officials said that the kidnapping had been perpetrated by a band of nomads who intended to sell Anita into the slave trade once they reached the coast of the Arabian peninsula. A thriving slave trade based on kidnapped white women was probably quite plausible to most newspaper readers. Officials stated that the nomads probably did not know that their intended victims were American.

Contemporary sources suggest that Carroll may have been evaluating a port city, Chahbahar, for use as a potential military base. As the United States supported the Shah’s regime over the Balochis, an American base on their home turf was not appealing to Balochi resistance fighters. The Carrolls were likely targeted because they were American. It is easier to understand the incident in hindsight, since we are now all-too familiar with resistance fighters and anti-American sentiment.

For the next week, news stories flew out over the AP wire regarding the abduction of the “pretty American woman.” The Shah of Iran assured America that everything would be done to track down the bandits, and that more than a thousand Iranian troops were in pursuit of the kidnappers. Would-be rescuers were aided in their efforts by a trail of paper and clothing, apparently left by Anita as she was taken away. Leaflets were dropped over Balochistan demanding her safe return and promising an unlimited ransom and amnesty; sources claimed to have seen a white woman, unharmed, riding towards Pakistan with a group of Balochi women and children. On March 31, a week after the abduction, the headlines blared, “Bandit Will Release Anita!” There followed reports that the “leader of the desert outlaws” had assured government officials that Anita Huovar Carroll was safe and would be returned unharmed. Her brother, John Huovar, told the Associated Press, “We’re not jumping up and down yet, but it certainly sounds good.”

But the following day it was reported that Anita Huovar Carroll’s body had been found, just ten miles from site of the ambush. She had survived her husband by less than a day. Her body was returned to the United States and she was buried beside her husband at Sunset Hills Memorial Park in Bellevue, WA. For her friends and family in Issaquah, Anita’s death was a private and personal tragedy. But for those who did not know her, it was a significant international event.

In addition to census records, World War I draft records, and the Issaquah Press, the following were sources for this article:

Barlow, Elizabeth., “Middle East Facts and Fictions.” The Journal of the International Institute, Volume 2, No. 2. Published by the University of Michigan. 1995.

We had several reader responses regarding the article on Anita Huovar Carroll that appeared in last quarter’s edition of Past Times. Anita was born and raised in Issaquah, and lived a short but remarkable life as the principal of a school in Yokohama, and as the wife of a USAID employee posted in Iran. In 1957, she and her husband were killed in Iran. One of Anita’s classmates, Mabel Nyberg, wrote, “I enjoyed the article on Anita Huovar. I have many happy memories and then the sad ending.” Anita’s sister, Lyllevan “Cappi” Davidson also contacted us to thank us for the story, and to add more information. We offer the following clarifications and corrections on the previous article.

Newspaper reports from the time of the Carrolls’ murder were filled with many errors and exaggerations –the most egregious being the tale that Anita had been kidnapped and taken from the scene, and later seen traveling with a group of women and children. In reality, she was killed at the site of the attack, and on the same day as her husband. Cappi noted that another falsehood reported (and unwittingly perpetuated in our newsletter article) was that the Americans had returned their attackers’ fire. Kevin and Anita Carroll were adamantly opposed to carrying firearms in a foreign nation, since their mission there was to assist the residents. Cappi also noted that Kevin and Anita Huovar Carroll were not consciously involved in the politics of Iran, although their lives were impacted by them. Kevin Carroll’s employer, USAID, sent him to the area to help the Iranians establish new industries and develop economically. The Carrolls lived in Kirman, not Balochistan, and developed warm relationships with their neighbors in the area. At the time of their death, they were traveling to a village some distance from Kirman.  We regret these errors and omissions, and thank Cappi Davidson for sharing her  memories of Anita.

Issaquah’s Kranick Family and the Year 1908
Scroll to top