New tidbits about Issaquah’s past are constantly revealing themselves here at the Issaquah History Museums. We recently received a treasure trove of letters from the late 1890s and early 1900s, all written to Bertha Wold Baxter. In the first in a series of Bertha-related blog posts, Collections Manager Julie Hunter deconstructs what Bertha’s correspondence can tell us about turn-of-the-20th-Century Issaquah. 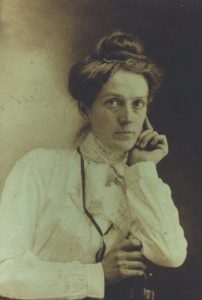 Accession 2015.10 includes sixty-seven letters addressed to either Miss Bertha Wold or Mrs. Bertha (Wold) Baxter.  Unfortunately, no letters written by Bertha have come into the collections.  Given that her correspondents praised her faithfulness in writing and the quality of her information, this really does feel like a loss.

Bertha, whose life spanned 1877-1965, was born into the marriage of two quintessential Issaquah founding families, the Bushes and the Wolds.  Her father was Peter Wold, brother to Ingebright and Lars, and her mother was Mary Samantha (usually known as Samantha) Bush, daughter of James William and Martha Stewart Bush.  Unfortunately, this was not a happy marriage.  Peter was 34 and Samantha was 14 when they wed in 1869.  Over the following ten years, Samantha bore three or four children. (This depends on whether a census taker mistook the name Clara for Della, or whether two daughters were both born in 1879; my thinking is that Della was the real daughter and that “Clara” was a clerical error on the part of the Washington census taker. “Clara” shows up in two census records where “Della” does not but there are no other records of such a child having existed.  Similarly, Bertha’s name is variously listed in census records, once as “Bertie” and once as “Martha” with a smudge across it.)

By 1880, Samantha was no longer with Peter.  Their children had been born in Ellensburg, where she and Peter had moved and where he stayed in 1880.  She came back to Issaquah with her daughters.  Their son William, who turned seven that year, apparently stayed with his father; two different Washington Territorial census records in the 1880s show “Willie Wold” with Peter in Ellensburg.

Census records show Samantha and her daughters bouncing around between the homes of various friends and relatives over the next decade.  When the 1880 Washington Territorial census was taken (month and day not recorded),  Samantha was listed as a “housewife” living with Peter’s brothers in Issaquah, with her one- and three-year-old daughters living with neighbor Charles Wilson’s family.  The Federal census taken on June 18 of that year shows her as a “servant” working and living in the George Tibbetts household.  At that point, her two daughters, ages one and three, were living with Cyrus and Emily Bush Darst, as was their fellow pioneer Tom Cherry.  Emily Darst was Samantha’s sister, so the girls were her nieces, not granddaughters as the census taker listed them.   One of the lessons from this search has been that census records, while very helpful for following general outlines of who was where when, and in association with whom, cannot be treated as being infallible.  Details of spelling, or one name mistaken for another that sounds similar, are very common mistakes. 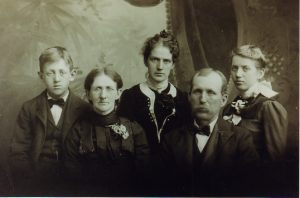 Although the 1883 Washington Territorial census shows Mary Samantha and Peter back together, living with their two daughters (no mention of son William) in Issaquah, whatever rapprochement they may have attempted failed.  That year Samantha was the plaintiff in divorce proceedings, and her marriage to Peter was legally dissolved.  Four years later, in 1887, she and her daughters Bertha and Della were listed as members of the household of brother-in-law Ingebright Wold.  She remarried, to Paul Prue, on February 22, 1888.  Fifteen months later, the Prues were living in Fall City with their two infants, twins Edna and Edgar.  None of Samantha’s older children were listed with them in that Territorial census.  Della, at least, moved to Fall City by 1890.  She died there at age 10, on March 11.  She is buried in the Fall City Cemetery.