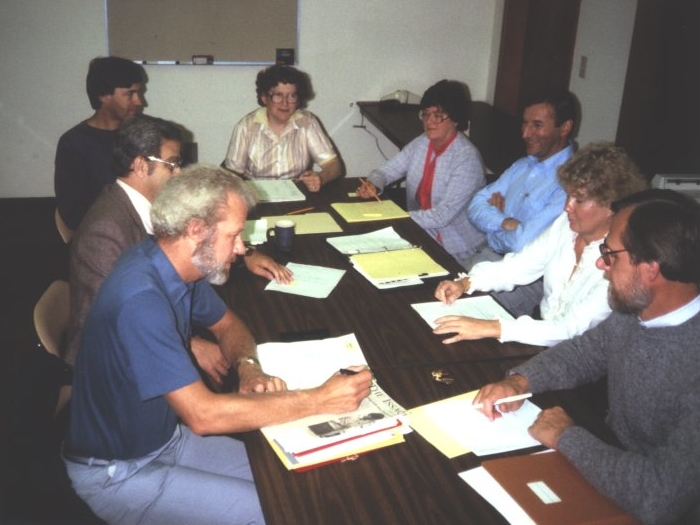 The recent death of Bob Gray was a reminder that Issaquah was once home to an unconventional church. The Pine Lake Presbyterian Church, where Gray was pastor, never owned a building and turned its efforts toward serving the community. In an oral history he completed for the Issaquah History Museums in 2006 Gray recalled his days with the church.

“I came here [in 1966]. It was unusual that I not only organized the church but then I was called to be minister on a full-time basis. And I stayed for 25 years, which is unusual.” Soon after arriving Gray started to communicate to the congregation “that I had a different concept of the church. The primary one was the church was people and not buildings.” The church met on Sundays at Providence Heights (later the Lutheran Bible College). All other meetings were held in people’s homes.

“We began to look around at what we thought might be needed in the community. …I thought that we needed to find ways to bring people together. … The first thing we did involved the Issaquah Theater. … We’d bring films to the theater that had some substance that would provide for the opportunity for discussion. We called it ‘Forum Theater.’”

“We eventually took over the theater when the owner decided to retire. However, … before we did that, we started a bookstore across the street. … We called it the Forum Bookstore. We wanted it to be a kind of drop-in center, where people could sit and have a cup of coffee and talk. … We turned the place into a coffeehouse on Friday nights. … We’d have book readings and speakers.”

“In 1970 Boeing hit a low spot and laid off 35.000 people. … An organization formed in the Seattle area called ‘Neighbors in Need.’ I was asked to come to a meeting, and I ended up forming the food bank in Issaquah.” It was run by volunteers from Pine Lake Presbyterian, and then volunteers from other churches joined in. A clothing bank followed.

“We started an emergency financial aid program. … Money came from about five churches. I had the checkbook.” At first there were referrals, then people simply started showing up at Gray’s office. Eventually, “the whole organization got together – the emergency aid program, the food bank, the clothing bank – and that became Issaquah Valley Community Services.”

The church’s most unusual project involved setting up a lab in 1976 for member Ruth Shearer, who had a Ph.D. in molecular genetics. Twelve people in the church became the board of directors. It is now the Center for Infectious Disease Research in Seattle.

“I saw a lot of things happening here that I had hoped would happen, in regard to people getting together and developing things like Salmon Days. And I didn’t really have a part in that. But the church did.” It had a booth that raised funds for the Eastside Sexual Assault Center for Children, which Gray helped start.

“I’ve talked about my doing things, but it was always with other people in the church.” All the group’s projects were staffed by volunteers. Considering that the congregation never grew beyond 121 members, Pine Lake Presbyterian’s impact on the community was far beyond its size.

Bob Gray was elected to the Issaquah Hall of Fame in 1989. He retired in 1991. At the request of the few remaining members, the church was dissolved in 2000.