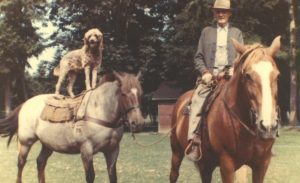 In addition to being one of the founding members of the Issaquah Historical Society (today’s Issaquah History Museums), Harriet Fish was a writer who researched and recorded the stories of her fellow Issaquahns. She and her husband, Edwards Fish, wrote mostly about Issaquah’s distant history. But Harriet Fish also enjoyed recording Issaquah as it was during the time she lived here.
One of the community characters that Harriet Fishs wrote about was actually an animal – a dog named Bojo, who made a name for himself by learning to ride horses. Bojo the Horseriding Dog belonged to Lewis and Bea Lefler, who lived on Pine Lake. Bojo, a grey poodle, came to the Lefler house as a puppy in 1960.
In the 1960s, the Pine Lake Plateau was largely rural. The Leflers had a 50-acre ranch they named Redwin Acres. In addition to Bojo, the Leflers has several horses named Lewbea and Rusty. According to the Leflers, Bojo took a particular shine to the horse Rusty, and could be seen companionably resting with the horse, or giving the horse’s ears a wash. Bojo’s desire to become a horseback-riding canine was probably also driven his jealousy over being left behind when Lew Lefler went out for a ride.
It was September 25th, 1963, Lewis Lefler and Bojo took their first ride together. According to Harriet Fish’s notes, the pair shared a horse on this initial ride. Bojo had a tendency to slide off the horse until Lefler provided an old piece of carpeting for the dog to sit on. By June of 1964, Lefler had constructed a special saddle made of of canvas and carpeting, with strips of rubber hose (later made from harness leather) on the sides to support Bojo’s four feet. Now when Lefler and Bojo went riding, Bojo rode on Rusty while Lew Lefler had Lewbea all to himself. Lefler also constructed a special mounting ramp for Bojo, to save Lefler having to lift the dog up himself.
During a visit to the Lefler’s property in 1964, Harriet described Bojo as “impatiently lead[ing] Lew down the woodsy trail to the horse corral. Anxious and eager, he is always ahead… Bojo is equally at home lying down or sitting up, facing forward or backward, as he pivots in the saddle at will. And speed holds no fear for him. He just hunkers down like a jockey and races along as fast as the horse can go.” Evidently it was hard to keep Bojo away from the trails; he could return from a five hour ride with Lew Lefler and still whine for more.
In 1965, Lew and Bojo rode together in the Issaquah Labor Day Parade. Bojo was still living – and riding horses – as of 1971.

From the Digital Collections: Happy Halloween!