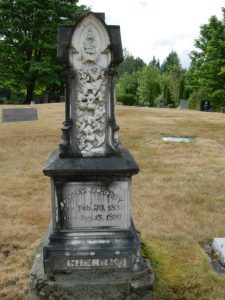 Bertha’s skill with correspondence was used to help her grandmother in at least one instance. When fellow Issaquah pioneer Tom Cherry died in 1899, none of his family lived in the area.  Bertha had known him virtually all her life, having lived with her aunt and uncle, Emma and Cyrus Darst, at the same time he did, when Bertha was three years old.  Three days before he died, he wrote a will in which he appointed Martha Stewart Bush as his executrix.  The will was witnessed by P. J. Smith and John Robertson and notarized by J. H. Gibson.  Tom’s siblings and their descendants were back in Arkansas (where they had been when he started moving west on his own), Texas, and the Indian Territory (now Oklahoma).  His brother James Madison Cherry wrote four times to Bertha, thanking her for telling him what was going on with the estate and lamenting his inability to engage a competent and faithful lawyer to represent the family’s interests.  By the end of the correspondence, he was writing about his daily activities and hoping to stay in communication with Bertha.

The probate records are preserved as case number 3314 in the Washington, Wills and Probate Records, 1851-1970, and are available through Ancestry.com.  What they show is a situation complicated by distance and communications issues.  In essence, Tom left “My best friend, Mrs. Martha Bush,” his executrix, the sum of $1000.  The rest of his estate, beyond his debts and $500 set aside for his burial and monument (still visible in Issaquah’s Hillside Cemetery) was to be shared among his family.  There were problems, though, which only show clearly if the correspondence is added to the probate records.  The bulk of Tom’s estate was eighty acres of land near Lake Sammamish (described as S.E. 4 of NE 4, SW4 of NE4 >Section 20/Township 24/Range 6), valued at $5500.00.  There were also personal goods and some cash and notes on hand.  Martha discharged all of the debts and sold the small items, including the violin valued at $3 that is now in the IHM collections. She then had to petition the court for permission to auction the land in order to have enough cash to carry out the specified distribution.

Meanwhile, Bertha corresponded with Tom’s brother, James Madison Cherry, telling him about the estate.  He signed all of his letters “J. M. Cherry.”  At one time, he wondered if he should make the trip to Seattle to be present when the land was sold, but he was not able to do that.  The land was bought on April 2, 1901, by James Foreman.  He paid $5500, right on the valuation.  As they were coming close to the final distribution, which would happen in August of 1902, J. M. Cherry wrote on June 5, 1902, “. . .  I Would have never known anything if you had not been So kind I can never forget you or Ever Repay your favors.”  Earlier in this letter he detailed his struggle to get local representation for the family and some of the work he had done to facilitate the fair sharing of the residual pool’s money,

I written Benson about a month later + When he found I had Written often lawyers he   answered at once + they did two he thought I knew no other lawyers + he  would get 10 percent        Jacobs had never Written me yet I got papers for all of the heirs to Sign + have Sent them on and Signed With the others here and Sent Back to Nobel.

Jacobs was probably the colorfully named Orange Jacobs, the court appointed Guardian ad Litem representing the minor children in the residual pool.  The estate had had to petition the court to appoint one to represent them at the hearing to authorize the sale of the land.

The papers that J. M. Cherry referred to getting signed and sent were numerous affidavits from his brothers and other heirs, petitioning the court for a change in the distribution laid out in the will.  Tom had, whether from illness or ignorance of family happenings, misspoken when he listed those who were to receive money.  His apparent intent was to bequeath all of the residual of his estate equally to his surviving siblings, with proportional shares to the heirs of his siblings who had predeceased him.  When he listed them by name, he named one as living who had already died with no issue and left out one whose grandchildren were alive but orphaned.  The court records include a letter from one of the family members, M. E. Gage, asking on behalf of the whole family that this be set right.  There was a form that each living individual who had been named in the original will had to sign in order to include the heirs who had been omitted.  Through J.M.’s efforts, all of the affidavits were properly signed and returned to Frank A. Noble, who in the end represented all of the “heirs at law and devisees.”  The affidavits are retained in the probate records.  The final members of the residual pool were seventeen people living back east, and they split $4,430.60.  There were six siblings who either survived Tom or had issue surviving him, so the shares were based on sixths.  The three living brothers received $746.66 each.  After that, various levels of descendants of the three who predeceased him but left heirs received either a twelfth, a thirtieth, or a ninetieth of the money, with the smallest shares being $49.77.3