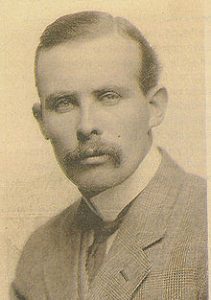 My last post regarding anti-German propaganda and the use of the term Hun during WWI created quite a discussion. You can read the comments and my response in that post. I want to continue along the same vein of German hatred during WWI, and how it directly affected someone involved in a large part of Issaquah history. Around 1912, Gustav Konstantin von Alvensleben held stake in Issaquah and Superior Mining Company. Von Alvensleben was the godson of the Kaiser Wilhelm and came to America with millions of dollars to start his businesses. He became directly involved in the Issaquah mines, helping to turn the business around after it faced bankruptcy. The mine facilities were brought up to modern standards of the time and he worked to ensure fair wages, humane working conditions and cooperation with the unions. The mine was booming once again.

When WWI came around von Alvensleben was living in Canada. Canada entered the war as a part of the British Empire and so von Alvensleben had to flee to America as he faced arrest for being German. Leaving all his assets behind to be seized as enemy property, he escaped to an America not yet involved in the war. But in 1917, when the United States entered WWI, von Alvensleben became a suspected spy by the Counter Intelligence section of the United States Secret Service.

A business associate of von Alvensleben’s happened to be a part of this Counter Intelligence section and was able to arrest von Alvensleben. He was transferred to an internment camp at Fort Douglas in Utah.

I was surprised to learn of internment camps during WWI. We are taught about the Japanese internment camps during WWII, but not so much about German ones during WWI. Fort Douglas in Utah housed Prisoners of War, Alien Enemy Civilian Internees, and Conscientious Objectors. Von Alvensleben was one of about 785 Alien Enemy Civilian Internees. These men were rounded up by the Justice department mostly from the western United States and were civilian men of German and Austro-Hungarian citizenship.Von Alvensleben was arrested on August 8, 1917 and interned 10 days later. He remained at Fort Douglas until March 3, 1920. For reference, the German armies surrendered on November 11, 1918. After the war he was acquitted of all charges – among his defenders was his arresting officer. He was naturalized as a citizen in 1939. He was never able to return to the economic success he had prior to the war because of the assets seized by Canadian government.

For more information on German hatred in WWI and Fort Douglas Internment Camp see the following:

The Clash Between Labor and Capitalism
3 replies