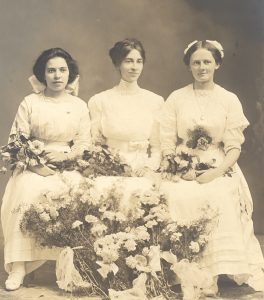 In autumn of 2016, Issaquah’s newest high school opened. Named Gibson Ek Innovative High, the high school lives up to its title. The school has been constructed to look like a traditional work site, rather than a school. Instead of traditional classes, students sign up for “offerings” that apply to their goals and interests. Each student completes a hands-on internship that will help them gain competency in a variety of skills. The goal is to provide a personalized education for each student.

Gibson Ek is a thoroughly 21st Century school — but its name harks back to Issaquah’s early days. Gibson Ek’s name is derived from the first three students at Issaquah schools to complete their education and earn their degrees in Issaquah in 1911. To be clear, these were not the first Issaquahns to earn a high school diploma at all; they were simple the first to attend Issaquah schools all the way until graduation. Families who were well off could afford to send their children to school in Seattle, and some people in Issaquah did this.

But school children had been learning reading, writing, and ‘rithmatic in Issaquah since the late 1880s. Why did it take until 1911 before a high school student graduated?

For one thing, attaining a high school degree was unusual at this time in our history. A young person was considered well-served if they completed eight years of schooling. Unless someone planned on working as a doctor, lawyer, teacher, or other licensed professional, schooling past the 8th grade was not crucial.

Not only was a high school degree unnecessary for many types of work, staying in school long enough to earn one meant lost family income. Being a dedicated student interfered with things like taking a paying job outside the home, or rolling up ones sleeves to assist around the household or farm. Many young people were needed at home for economic reasons. Because men were able to earn more than women, girls were often “allowed” to continue longer in school than their male counterparts.

Who were the young women who first graduated from Issaquah High School? They were Mary Gibson, Olive Gibson, and Mabel Ek. I am sure that, if these three young women were alive today, they would be honored and touched to have inspired the name for Issaquah’s newest high school.

Mabel Ek was the 8th of ten children born to Anton and Sarah Ek, immigrants from Sweden. Her father, Anton, worked in the coal mines for decades. Mabel’s two oldest brothers worked as coal miners, but the younger brothers found other kinds of work. Mabel’s older sister, Victoria, worked as a stenographer for the Issaquah Bank. As of the 1920 census, Mabel was a boarder in Seattle and was working as a post office clerk.  Mabel went on to marry Leonard Brady in 1926, and she lived the remainder of her life on Queen Anne Hill in Seattle. She participated in graduation exercises at the Issaquah High School during her later life, and was still able to fit into her 1911 graduation gown. The gown is now part of the collections held by the Issaquah History Museum. Mabel Ek Brady passed away in 1990, at the age of 97.

Olive Gibson was the daughter of Dr. William Elry Gibson and Fannie Garner Gibson. Dr. Gibson was Issaquah’s country doctor, and occasional mayor. She married Wilfred Bayh in 1913, and the couple had two sons together. The marriage had evidently fallen flat by 1920, however, as Olive was living back in Issaquah with her parents, and her two small sons. Olive put her high school diploma to good use, holding several jobs during her life in Issaquah. In 1930, Olive was working as a postal clerk, a job she would hold for more than 30 years. Olive played the piano at the Issaquah Theatre for a time, and also taught piano lessons in Issaquah. She was also a clerk for the Issaquah School District. In her later life, Olive quit Issaquah and moved to San Francisco to live with one of her sons. She continued to make an annual trip back to Issaquah to see friends and family members. Olive Gibson Bayh passed away in San Francisco in 1988, at the age of 94.

Mary Gibson was no relation to her co-graduate, Olive. Her parents were Thomas Gibson and Susanna Weston Gibson. Mary also had a brother, Thomas Henry Gibson. Her father, Thomas Gibson immigrated to the United States with his parents as a child. He met and married Susanna Weston in Iowa. Mary wed Leonard Miles in 1913 — just two days after Mabel Ek wed Wilfred Bayh. Like Mary’s father, her husband operated a general store in Issaquah. The couple had two children. Mary Gibson Miles died at a much younger age than her two co-graduates, passing away in Issaquah in 1955, at the age of 60.