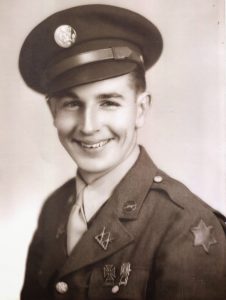 Maria McLeod:  …Tell me a story about you and Walt Seil.  I know you guys ran around together, and I’m sure there’s a lot of stories.  Some you could probably tell, some you can’t.  [laughter]  But what’s a memorable moment with your friend Walt?

Bill Evans:  Well, of course, we graduated in the same class.  On graduation night, we – big stuff – I was president of my senior class – so we tried to arrange a party.  But we graduated on June 3, 1941.  It was a Tuesday night.  It was raining to beat heck.  Usually, the first part of June, I always remember the rain.  We didn’t get good weather constantly until July.
…So I had a class meeting the day before we graduated, and I said, “It’s our last time together as a group.  How are we going to celebrate?”
Well, a lot of them had family parties on graduation night.  I had a graduation party, too, with my family.  But we all decided well, after the party is over – and it’ll probably be over about ten o’clock – we’ll meet back at the high school and go to a party in Seattle.  We’ll find something that’s really good to do. So Walt and I and another fellow, I don’t remember who the other fellow was, but we had our dates, and we met back at the school at ten o’clock.  And we went to Seattle.  We thought, “This’ll be great!  We six will do something that nobody else does.”
So we went down to Boeing Field.  We were going to rent an airplane and take our first flight over the city.  Well, we got down to Boeing Field and, of course, Tuesday night, ten o’clock, everything was pitch dark!  There was nobody there.
“So what do we do now?”
“Well, let’s be daring.”
And there happened to be a bottle club on First Avenue in Seattle, with entertainment and so forth.  But it wasn’t a club like you think of nowadays.  But still, you had to be 21 to get in.  Of course, we looked like we were eighteen.  [chuckles]  So we got stopped at the door!  And that took care of that.
“What do we do now?  It’s midnight!”
“Well, there’s all-night shows.”
“Big deal.”
So we went to an all-night show.  We parked Walt’s car up on somebody’s rooftop parking downtown.  We went to the nearest all-night show.  We enjoyed the show.  And our dates were kind of worried, because they’d never been out this late before.
MM:  No, that’s probably about two in the morning by that point.
BE:  By the time we got out of the show, it was almost dawn.  The girls were hungry, naturally – like my wife – and so we went to breakfast.  My girl lived in Upper Preston.  There’s a Lower Preston we all know, but in those days … and still, people live up there.  It’s further up toward Echo Glen, fairly close to that.  And it’s a little Swedish flicka that I went with.  Her mother was at the door when I brought her home, and the sun was shining bright.  And she was a sweet little lady.
She said, “Now, Bill, you know that Francesis younger than you are.”
“Yes, I know.”
She said, “And we live in a community where everybody sees everything that goes on.”
I said, “Well, nothing went on.  Things didn’t work out, and we ended up at an all-night show and went to breakfast.”
She said, “Well, please don’t bring her home in the daylight anymore.”  [laughter]
“I promise.”  [laughing]
MM:  Did the other guys get in trouble, or the other girls?  Do you remember?
BE:  I don’t remember, because I was sweating enough!  [laughter]
Oral History Transcript / Full Record
William C. Evans Jr. was born in 1923 to William G. Evans Sr. and Ella Willig Evans. Bill was interviewed in 2006 by Maria McLeod as part of IHM’s oral history project. Bill talks about his grandfather’s work with Issaquah Water Department, growing up in Issaquah, and WWII. His interview is extensive and he provides a lot of information that’s impossible to summarize. See the Full Record for a complete list of people and subjects discussed.
Bill has been written about a few times on this blog before – check out previous blog entries:
May 28, 2010 – Honoring Issaquah’s Veterans
May 31, 2012 – Looking for Local History: Bill Evans Tries to Enlist
https://secureservercdn.net/50.62.89.111/ozq.76d.myftpupload.com/wp-content/uploads/2015/01/Evans-2C-2BBill2.jpg?time=1635364455 1024 770 IssqErica https://secureservercdn.net/50.62.89.111/ozq.76d.myftpupload.com/wp-content/uploads/2015/01/Issaquah-History-Museums1.png IssqErica2013-10-16 07:00:002017-04-28 16:12:11Hearing History: Bill Evans

This NOT Just In: Great Seattle Fire