Maria McLeod: So I wanted to ask you about the Issaquah Creek, I wanted to ask you about the watershed, and I wanted to ask you about water quality, and what you’ve noticed about water quality, and what ways water quality has been compromised, or that you fear it’s been compromised since doing your work.
Ruth Kees:  Well … mainly I think what’s affecting this country now is that the fermenting of little urban areas, areas of urbanization.  They permit people to dig a well, and if the well will produce 5,000 gallons a day –
And I don’t think they’ve ever run a test on any of them to make sure that they would produce 5,000 water a day.  They figure, we can put six houses on 5,000 gallons of water a day.  And we’ll group them all in one little spot, and that will keep them from sprouting out all over the country.
Well, I think I’d rather see one house per 5 acres than these little urban areas, which require all kinds of amenities that these other houses don’t require.  And you won’t get people watering their lawns.  In other words, we’re urbanizing the area whether it wants to be urbanized or not, by permitting these little colonies.  [Sounds of material being rattled around in the background]
MM:  Are you worried about the kind of growth that’s occurred in Issaquah since you’ve – I mean, in recent years, and that compromising water quality and the environment here?
RK:  Every road that they put in is putting a dike in the ground.  And this disrupts the transmission of ground water.  Or every little urban area that they put into, also disrupts – uh – it increases runoff because of having more – uh – gosh what do you call it?  Ground that won’t permit …
MM:  Impermeable?
RK:  Impermeable surfaces.  Every road is an impermeable surface.  And this creates runoff.  And the water doesn’t get back into the ground where it does any good.
And look at Lake Sammamish now.  Lake Sammamish used to be a lake that did not respond to rainfall.  It was fairly static.  People have built docks and they’ve built all kinds of wood structures along the edge of Lake Sammamish, and by golly, now some of the – after a rainfall, they’re under water!
And this never happened before.  And that’s because of increased runoff.  So that all the water has just poured into Lake Sammamish, instead of going into the ground where it will replenish the aquifers.
Interview 1: Oral History Transcript / Full Record 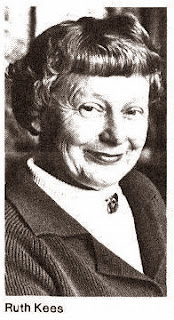 Ruth Moore Kees was born in Nebraska in 1923 to Paul Moore and Myrtle Schultz Moore. Ruth was interviewed in 2006 by Maria McLeod as part of IHM’s oral history project. Her interview covers her work as a government inspector during WWII, getting her pilot’s license and working at Boeing, and the impact Issaquah’s development has had on the environment and her effort to protect it. If you’re interested in local environmental issues, both of Ruth’s interviews are amazing reads.
You can also visit the Ruth Kees Big Tree Trail on Tiger Mountain if you’re in the mood for a hike. See the City of Issaquah’s Heritage Trees page for more information.
https://secureservercdn.net/50.62.195.83/ozq.76d.myftpupload.com/wp-content/uploads/2015/12/ruthkees.jpg?time=1618091394 360 196 IssqErica https://secureservercdn.net/50.62.195.83/ozq.76d.myftpupload.com/wp-content/uploads/2015/01/Issaquah-History-Museums1.png IssqErica2013-10-19 07:00:002017-05-02 12:36:47Hearing History: Ruth Kees