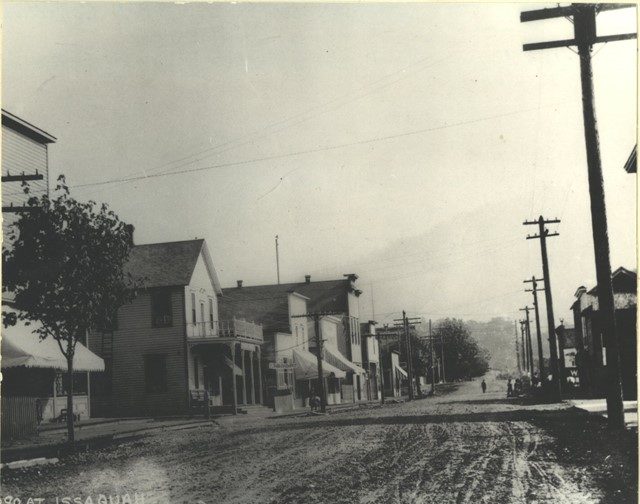 In hindsight, some people should have chosen different careers. But, of course, they don’t know it at the time. This can certainly be said of the career of Henry Smith of Issaquah. Henry came to Issaquah in 1895, and built a “residence” hotel to cater to the coal miners of this pioneer community. There were many such hotels in the Issaquah of that era.

The first problem that Henry ran into was that about the time that he finished his hotel, the coal miners of Issaquah went on strike. Many of them left town. Henry had a great hotel, but a severe lack of guests to fill its rooms. Henry put his hotel up for lease, and it was eventually let to a Mrs. John Foster. Mrs. Foster is a bit of a mystery. But she obviously had a plan to make money using Mr. Smith’s hotel. She was still leasing the hotel from Henry in early 1898, so her plan, whatever it was, must have been working.

But on St. Patrick’s Day, March 17, 1898, both Mrs. Foster’s lease and Henry Smith’s luck abruptly ran out. In the late morning hours of that fateful day, the Gilman hotel caught fire. Guests had to flee in their underclothes. The fire was so intense that for a time many buildings, including the train depot (known that year as the O&I – Oregon and International), were threatened with destruction.  There was a real fear that the entire town would be swept away by the conflagration.

Just down the street from this hotel was Coopers Roost, a hotel and drinking establishment where out of work coal miners could buy booze and drink it at an outdoor patio on the corner of what is now Front St. and Sunset Blvd. There were plenty of men drinking there that day, but they were either too drunk or too disinterested to help fight the fire that could easily have burnt down their town.

Thanks to the efforts of Miss Helen Simpson, a bucket brigade of town women was organized, and through their efforts they kept the fire from spreading to other nearby buildings. The men of the town just sat around and watched (and drank). The Gilman Hotel burned to the ground, but was fully insured. Mr. Smith presumably collected his insurance money, but he never rebuilt his hotel, and left town several years later.

The destruction of his hotel, and the lackluster support of the men of Issaquah, should perhaps have been omens for Mr. Smith that he might be in the wrong profession. Maybe being a hotelier wasn’t what he should be doing. But hindsight is 20/20, and Mr. Smith moved to Portland, Oregon. He built a new hotel in that city, and probably in homage to his original beloved hotel up north, and wanting to carry on the name, named it the Gilman Hotel.  The 4-story hotel opened in 1909.

But once again, fate took a hand in Henry Smith’s life.  In the early morning hours of  Monday, February 26, 1912, his second Gilman Hotel burned to the ground. One person died of a heart attack. One person jumped to his demise from a fourth floor window, and late in the day it was determined that 3 others were missing. His second Gilman Hotel was not insured, and this put Henry out of the hotel ownership business permanently. He went to work in a clothing factory. Thankfully, as far as I can tell, the clothing factory did not burn down. It seems only hotels held bad luck for poor Henry Smith. After the burning of his second hotel, Mr. Smith disappeared from history.

The Tale of Ole Bergen