This article by Tom Anderson originally appeared in the Issaquah Press on June 16, 2016. 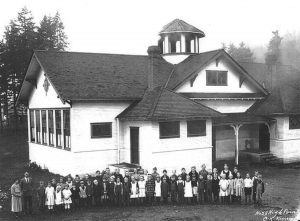 The High Point School in 1926. (Courtesy of Eric Erickson)

What’s so “high” about High Point?  Many have wondered.

Well, you have to think about travelling to High Point from Issaquah a hundred years ago by rail.  The tracks left Issaquah in the vicinity of the Sunset on-ramp to I90 (Exit 18) at an elevation of about 200 feet.  It’s a steady climb from there to High Point (Exit 20) at 450 feet – about a 2% grade.  It then flattens between High Point and Preston before heading downhill into the Raging River valley between Preston and Fall City.  So, if you were on the train heading east out of town, you would have noticed that the locomotive was working hard on the climb, and then when the grade flattened out, the train picked up speed and you would say to yourself – “Oh, we must have made it to the high point.”  So there you go – “High Point.”

And here is another question many have pondered: “Why does High Point even have a name – it’s not even a wide spot in the road?”  True enough today, but a hundred years ago it was a bustling little town with a shingle mill, saw mill, hotel, store, church, school, and many houses.  What happened?  In short, two things happened: depletion of trees and our insatiable appetite for roads.  The High Point Mill Company cut the last tree it had the rights to cut on Tiger Mountain in 1928.  The mill closed in 1929, but later reopened under new ownership, milling logs brought from elsewhere.  So the mill lingered on, but the heyday was over.  Then, in 1957 the widening of Highway 10 necessitated the complete removal of the mill.  The valley floor is narrow in that vicinity and a wide road consumed most of it.  The hotel survived and was converted to the Sparkling Brook service station.  It, too, had to go when Highway 10 was replaced by Interstate 90 around 1975.

Today, the only non-residential building that remains is the old school house, now used as a church.  It was built in 1911 as a one-room school house.  A second classroom was added as the community grew.  With the depletion of the timber, the growth stopped, and then reversed.  By the mid-1930s only one classroom was needed again.  The High Point Mission Church at that point in time was looking for a new meeting place as they had been using a building owned by the mill which now was needed for other purposes.  And so the tenure of the church in the school house began, using the room no longer needed by the school.  In 1940 the High Point School District merged with the Issaquah School District, and the school was closed.  The church bought the building and it has been used for church purposes ever since. 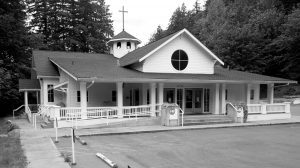 The High Point Church in 2016. (Courtesy of Tom Anderson)

The church has interesting roots.  The brothers John and August Lovegren emigrated from Sweden with their families.  August bought land in the Preston area and formed the Preston Mill Company, while his brother John bought land in the High Point area and formed the High Point Mill Company.  August was a Baptist, and so the church in Preston was a Baptist church.  Brother John had closer affinity to the Mission Covenant Church of Sweden, and so the church in High Point joined that denomination under the banner of the High Point Mission Church.  The word “Mission” in the name did not denote the church as a mission, but that the congregation had a mission to spread the word.  The churches, although of different denominations, had close ties and friendly relations over the years.

Eventually the church withdrew from the denomination, and officially changed its name to “Trinity Evangelical Church” in 1974.  It continued under that banner until 2013 when it merged with the nearby “I-90 Community Church” which was meeting in the Preston business park.  Today, it continues as an adjunct campus of that church.

Over the years the building has gone through many remodels and revisions.  Happily, the distinctive bell tower remains, keeping watch over what remains of the once-bustling community.

Thomas N. Anderson is a volunteer for the Issaquah History Museums.