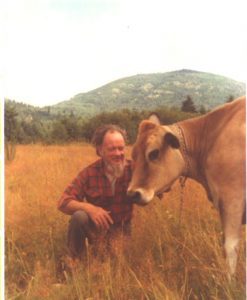 Reports of the occasional bear or cougar in our neighborhoods stir memories of the local wildlife in Irving Petite’s engaging books, written on his ranch up Tiger Mountain Road, where he lived pretty much off the land for over 40 years.

He and his partner Bill McCauley had bought 165 acres of logged-over land there in 1941, and they built the ranch and a family of wild, semi-wild and domestic animals who often shared Petite’s cabin and enriched his love of the natural world.

No pink doggie bows or studded collars for the companions of the man who emerged in his books and in his family’s recollections. He delighted in animals’ personalities and respected their independence (more than they respected his) as his cabin became their haven, and his ranch yard their park.

In his best known books, Mister B (Reader’s Digest Association, 1960), he tells of hearing loud “bear music” of cubs suckling and vocalizing in a shallow den under a log up an unused logging road on his property. He and Bill left well enough alone, only placing a few apples at the den’s mouth, until the day they heard the screams and screeches of one cub who had been rejected or abandoned. When Petite found the source of the noise, the little black bear grabbed his arm, climbed up his body, and nuzzled his neck as if suckling. Petite took the cub home and raised him like his own, always fascinated by the cub’s insatiable curiosity and vocal repertoire.

As the cub grew, the most difficult part, Petite wrote, was Mister B’s craving for affection. When Petite milked his cow, the cub climbed his back and “mumbled” into his neck. When he got too heavy, Petite shrugged him off and gave up his left foot to be gnawed on instead. The cub snuggled with Petite’s dog, Stella, who whined and yelped when the nuzzling got too much.

Petite’s niece Sue Morris, now of Seattle, remembers being chased by the young bear, who wanted to play (she didn’t). As Mister B galloped across the yard toward her, she fled to an old car parked in some blackberry bushes, jumped in, and frantically rolled up the windows just in time to foil the boisterous cub. With Mister B on top of the car, “we both waited for a long time,” as she puts it, until the bear tired of it and wandered off.

Sue remembers a day when the young bear “got mad” and trashed the cabin. “He opened the refrigerator — yes, he had learned how to open the refrigerator — and rummaged around and then he found flour and threw it around all over the kitchen.” The bear wanted “HIS food — the fruits, vegetables and sorghum that Uncle Irving fed him. He acted just like a four or five-year old human person!” When Irving returned, he looked around tolerantly and said, “Oh, I’d better get his food together for him.”

Sue also remembers a day when Irving was away and a tax collector came to the ranch. “Mister B ran over to the car and hovered over it. The tax collector left in a hurry.”

In “The Elderberry Tree” (Doubleday, 1964), Petite wrote about a pack rat which moved into his cabin. At night, she noisily dragged and dropped trophies that she had brought inside, carrying them in and out of her hiding places over his bed. Her treasures included an unbroken Japanese tea set, sardine cans and a cracked sunshade, as well as sticks and small branches. Some mornings, when he was out of kindling to start a fire, Petite stood on a chair and raided her stash of twigs.

Of course, Petite had plenty of room on his ranch and in his heart for not-so-wild life too. In “Life on Tiger Mountain” (Doubleday, 1966), he tells of a sow he called Ungodly moving in. If the cabin door was open, she went in. If it wasn’t, she forced it. Petite would then oblige her by scratching under her chin.

Petite was well-known locally for his goats, says his nephew Mike Petite, a local builder. “He must have had 50 of them in his barn,” says Mike, who also remembers a goat which was raised in Irving’s cabin. Petite milked many of the goats in the cabin during winter weather. When a neighbor went into the service in WWII, he left his goats with Petite, who combined the herds. Sue Morris remembers Petite letting the goats forage up Tiger Mountain and calling them back home in the evening. “He would just call them and they would all come!” One of these goats was especially attracted to Sue. Often, when she appeared at the cabin, “he looked up, saw me and charged right over to butt me HARD!”

Both Mike and Sue lived as children on a part of the property Irving sold to their father, his brother Paul. The lived in Uncle Irving’s cabin when Paul was building their house. Mike lives today with his three children on what was once part of the original property.

Petite enjoyed times with his nephews and nieces. They would go up to what they called “Big Falls” on their creek. They went to a beach behind the falls, or slid down rocks below into a pool to swim. Mister B sometimes joined them there. 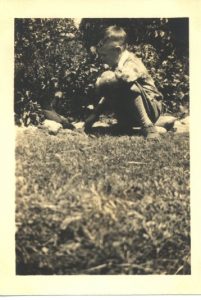 Sue remembers taking naps in the cabin with Man, an orphaned black-tailed deer raised by Petite. She would wake to see “those big, brown eyes peering” at her. The deer “was just like a dog,” she says. “He panted like a dog and even chased cars.”

Sue spent a lot of in the cabin with her uncle when she was growing up. She liked to do her homework by his fire. He would be typing nearby. She would struggle with her writing and he would look at it and give her his gentle advice. “It would be better like this…,” he’d day. Sometimes he would invite Sue to accompany him on flights in a small plane, gathering material for his articles. “He took good photos,” Sue adds.

Petite grew a big garden on his ranch. He picked wild blackberries, canned cherries and peaches, and made jam every year. When his ranch income was not enough, he made and sold fence posts, hop poles, and shakes from downed lumber and snags left behind on his land.

Petite substituted as a mail carrier on Issaquah Rural Route 2 and freelanced for the Seattle Times. He wrote articles on composting and recycling, among other topics, as well as four books about life on his mountain, and another about a trip to Alaska in a small boat. He filled his books with stories of possums, coyotes, mink, birds and the lessons of nature learned from the land in every season. He was sometimes called a local Thoreau, a title Sue says he would have enjoyed.

However, he was no hermit. He opened his home to many visitors, including artists, authors, researchers and photographers, says Sue. He helped neighbors with chores like roofing and provided work for young friends around the ranch. One of his stories tells of buying a coyote from some local boys who had just given it a bath to improve its sales value. 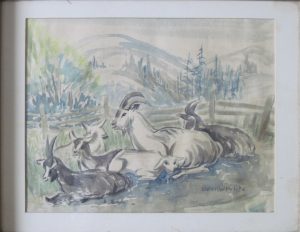 Irv Petite’s mother, Jean Wolverton Petite, did a lot of the art work for her son’s books. This sketch of Petite’s goats is by her.

Petite’s mother, Jean Wolverton Petite, illustrated some of his books and their book covers. She was a painter, sculptor, and illustrator for nature magazines such as Audubon, which liked her work because “she portrayed nature accurately, put the right birds with the right trees, etc.,” according to Sue. Irving learned from his mother’s example how to find edible and useful things in the wild. “His mother was really important to him and he modeled his love of nature and his self-discipline after her.” When asked about his writing habits, he said he guessed he wrote about 50 pages a day.

In 1984, Petite moved further away from population growth and development to the Colville Indian Resevation, where he lived near the town of Keller for more than 20 years. Mister B had been killed by hunters early on, when Petite was away from the ranch, and Man the deer, with a full head of antlers, had been driven in the back of Petite’s car the Woodland Park Zoo, because whenever he had been taken back to the wold, he had always showed up again at the cabin.

The Issaquah History Museums have several copies of Irving Petite’s books, now out of print, in the archives at the Gilman Town Hall. Some copies are also available through various online sources and in King County libraries.

The Great Depression
Scroll to top