“Fancy a seething, roaring whirlpool of white heat covering more than an acre of ground, towering hundreds of feet in the air… and you have the task [to put it out]… with a single stream of water no larger than a lady’s wrist.” –Issaquah Independent, September 24, 1904 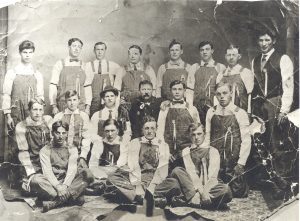 The Issaquah Volunteer Fire Department (IVFD) was founded in 1912, formalizing the loose association of townspeople previously responsible for fighting fires. The IVFD had its share of obstacles, the first of which was purchasing all its own equipment. After fund raising, the IVFD obtained an alarm bell, a hose cart and a small buildng

When the alarm bell rang, volunteers and adventure-hungry youngsters would sprint to Albin Ek’s ice cream parlor, where their uniforms are stored. The firemen clambered into their overalls while an audience of stunned customers looked on.

Edward Fish wrote in The Past at Present, “The first men to get across the street with both legs in their pants would roll the cart out of its stall… The excitement that ensued must have been wonderful – a stream of men, kids and dogs shouting and yapping through the town to deluge some worried homeowner with help and water.”

The IVFD emerged from WWI and the succeeding mine strikes and closures with a larger building and new equipment. In the early 1920s, the IVFD purchased a chemical cart and a Model T Ford fire truck.

Chemical firefighting required mixing ten pounds of soda and acid together to make fighting foam. In 1930, the Model T truck was replaced with the Model A, complete with a five hundred gallon water tank. By 1937, a Ford V-8 fire truck was in use.

During WWII, many firefighters joined the armed forces to fight for their country. Meanwhile, fires in Issaquah were fought just as bravely by a motley replacement crew of high school students, women and town merchants. Through it all, the IVFD maintained a capacity for fun and relaxation. The IVFD Hall, built in 1933 and torn down in the 1960s, hosted Saturday night dances and other social events. Its basement housed an indoor gun range. The IVFD was responsible for purchasing, clearing and maintaining Memorial Field, which they later deeded over to the City. The town’s baseball and football teams were primarily composed of volunteer firemen. 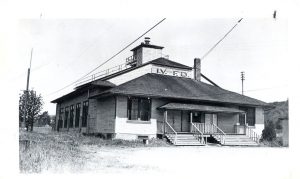 The IVFD Hall, built in 1933. The cupola was used as a spotter’s station during WWII.

The firemen also shared many comical adventures. For example, a man requested that his barn be burned down by use of a controlled fire. Much to the horror of the owner and the firemen, the IVFD accidentally burned down the wrong barn!

In another instance, firemen from the Snoqualmie Fire Department engaged the IVFD in a rowdy fire hose water fight on Mill Street (now Sunset Way).

In 1932, a dramatic battle between Mayor Stella Alexander and fire chief Remo Castagno occurred. Alexander insisted that the IVFD honor a law banning use of city-owned fire equipment beyond city limits. The firemen resented this restriction on their ability to fight fires whenever the need arose. According to Edwards Fish, the entire force “resigned… only after an unsuccessful attempt by the city administration to organize a substitute force, and some forthright strategy by the original firemen, that order was restored and the volunteers went back to work on their own terms.”

The years have brought many other changes to firefighting in Issaquah; the first paid fire chief was hired in 1970, and in 1999 the Issaquah district was consolidated with several others to become Eastside Fire and Rescue. Through it all, Issaquah residents have appreciated the lively nature, awe-inspiring effort and admirable courage of its heroic “fire laddies.”