In the January 11, 1908 issue of the Issaquah Independent (forerunner of today’s Issaquah Press), community news included mention of a New Year’s party hosted by Miss Olive Gibson (at which Mary Wold, dressed as a witch, told fortunes). A new piano had been purchased for the IOOF Hall and a “rousing dance” was to be held to celebrate on January 18. The Masons and Eastern Star installed officers for the new year, and the City Council met to appoint a new Town Marshal and conduct other business. Residents of the busy mining town were going about their usual business.

In spite of the town’s many saloons and frequently used jail, murder was not common. Most citizens of the town knew each other. While familiarity might breed contempt, it also prevented some crimes from being committed because few could remain anonymous.

George Kranick (as the name was generally spelled) was one of many immigrants from Austro-Hungary who came to the area to work as a miner. He immigrated to the USA in 1887 along with his wife Anne. In 1889 the family made their home in Washington state. Kranick was, by all accounts, a solid and reliable citizen. In 1900 he owned his own home and was employed as a coal miner. He spoke English (although he could not read or write it) and had been a naturalized citizen since shortly after his arrival in the USA.

It is not known what errand sent George Kranick to George Bennett’s house on the evening of January 12. George Bennett, also known as George Curry, was the adopted son of J.E. Bennett. He married in 1899 and came to Washington state from Nebraska sometime between 1900 and 1908. Also at Bennett’s house that night was Joe Pete, about whom very little is known.

Kranick was reportedly returning from a piece of property he had recently acquired and stopped to see Bennett. It is not known what transpired between the men, but Kranick fled the house at about 6:30 PM after shots were fired. He collapsed within 40 feet of the door and died an hour later, never having regained consciousness. The fatal shots were fired by Bennett’s single-barreled shotgun, which was loaded with bird shot. The shot entered under Kranick’s arm and “ranged forward and upward,” according to the newspaper’s report.

Bennett and Pete, who were inebriated at the time they were taken into custody, attempted to tell the Town Marshal a tale of suicide. This explanation was deemed implausible at an inquest the next morning. On January 14, Bennett and Pete were transferred to the county jail, where they languished for two months. Bennett would remain in jail until April, but Joe Pete was released from the county jail on March 7, after Bennett had confessed to having fired the fatal shot by accident.

In early April, a number of Issaquah residents traveled to Seattle to testify at Bennett’s trial. Among them were George Kranick’s widow, Anne, and the Kranick’s two oldest children, George and Mary (ages 21 and 15 respectively). After the evidence was presented, the jury deliberated for 21 hours and then returned a verdict of not guilty. Bennett returned home to Issaquah that night. By 1910 he and his family had moved on to Idaho; in 1920 they were living in Pierce County. George Bennett died at the age of 90 in Sacramento, California.

The Kranick family, recipients of a great deal of sympathy from community members, continued to experience hardships in the months to come.

In 1908, Mary Kranick was sixteen years old. In that era of Issaquah’s history, there were a relatively small number of reasons why the average 16 year old girl might have her name printed in the newspaper.  Church and school-related mentions were most common. Bessie Cubbon co-led a discussion topic at church entitled, “Immortal Until My Work is Done,” and Mabel Ek attended a Baptist convention. Anna Johnson was the secretary of the Busy Bee Club, an organization dedicated to raising funds for new windows at their church in Monohon. Alice Miles and Olive Palm were celebrated for their perfect attendance at school. Olive Gibson gave a reading of children’s poetry by Longfellow at a literary society meeting.

Mary Kranick appeared first as a tragic figure in the pages of the Issaquah Independent. First, she was one of the survivors of her father, George Kranick, who was shot and died on January 12, 1908. In April of 1908, Mary herself was called upon to testify as a witness at the trial of her father’s killer. The jury found Bennett not guilty.

Two months later, on June 19, the Issaquah Independent presented Mary Kranick in a different light. Under the headline, “Petit Larceny is Charged” was an account of the arrest of Mary and a companion, Lilly Hosko, for theft of items belonging to J.S McNenimee. The girls were arrested on June 18 and examined by Judge Enos Guss. Search warrants were issued and stolen goods were found in the girls’ homes. Both girls plead guilty and Judge Guss referred the case to the juvenile court in Seattle. Issaquah’s town marshal, Howard Case, escorted the girls into the city that night. 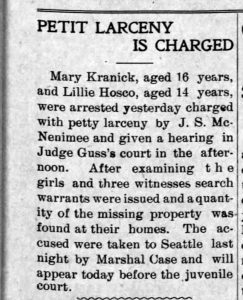 On June 19, Judge Archibald Frater dismissed the case against the girls and they were allowed to return home. Lillian Hosko returned to Issaquah by train on Monday night while Mary Kranick returned on Tuesday. Instead of taking the train all the way into town and disembarking at the Depot just blocks from her home, Mary got off at Bush’s siding. Bush’s siding was about a mile north of downtown Issaquah, near the home of the Bush family (roughly speaking, across the street from today’s Fred Meyer shopping center on East Lake Sammamish Parkway). This area of the Valley was home to the Bush, Tibbetts, Pickering and other farming families.

After disembarking from the train, Mary “loitered in the Valley” according to an Issaquah Independent article titled, “Girls in More Trouble.” She was subsequently arrested again, this time for taking wearing apparel from the Pickering home. On Wednesday morning she appeared before Judge Guss, and made a statement implicating Lillian Hosko in the theft. Both girls plead guilty once more, and once more they were sent to Seattle to face Judge Frater. And so the girls made their second appearance in juvenile court in scarcely a week.

Mary’s companion, Lillian Hosko, was 14 at the time of their arrest. There are so many similarities between Lillian and Mary that their comradeship comes as no surprise. They were both from Austro-Hungarian families, their parents having immigrated in the 1880s. Both families were active in St. Joseph’s Catholic Church. They lived within a block of each other. The Hoskos lived on Jones Street and the Kranicks on White (today’s 1st Avenue NW and 1st Place NW, respectively), an area where many Austro-Hungarian and Finnish coal mining families also lived. George Kranick and Joseph Hosko, their fathers, worked as coal miners and probably walked the path to Mine Hill together. Hosko was one of Kranick’s pallbearers.

Both girls were the third of five children. None of their respective siblings seem to have a blemish on their reputation. Mary’s older sister Anne was married and had two children by 1908; younger sister Kate excelled in school and later worked as an operator for the telephone company. Lillian’s sister also married, and the Kranick and Hosko sons worked in local industry. If they were involved in anything scandalous or unsavory, it was not mentioned in the Issaquah newspapers. The Kranicks and Hoskos were, by all accounts, upstanding citizens and respected by their peers.

As for those they stole from, little is known about Mr. and Mrs. J. S. McNenimee. What is known suggests that J. S. McNenimee was an engineer who worked for local mining companies. Their primary residence may have been in Seattle. Between 1908 and 1910, the Issaquah Independent notes frequent rail trips between Issaquah and Seattle by the McNenimees.

The Pickering family was (and is) well known in the Issaquah Valley. Mary and Lilly probably stole from the family of Ernest Pickering and his wife Camellia. Pickering operated the family dairy farm for most of his life; he also worked as the bookkeeper for the Issaquah & Superior Mine from roughly 1904 to 1907.

Why Did They Do It?

Just as we will probably never know the details surrounding George Kranick’s death, we may never know what impulse led Mary and Lillian to petty larceny. We do know that their families’ status as immigrants, Catholics, laborers already set them apart from other teenage girls whose accomplishments were remarked upon in the Issaquah Independent – and from the well-established, well-to-do families Mary and Lillian stole from. It is also hard to ignore the fact that loss of Mary Kranick’s father was fresh at the time of her trial.

After the second theft, the girls appeared in juvenile court on June 26, 1908 and were pronounced delinquent. They were both assigned to rehabilitation centers. Lillian Hosko was sent to the State Training School, while Mary Kranick was assigned to the Home of the Good Shepherd in Seattle. The companions’ paths diverge after this point. Lillian Hosko returned to Issaquah the following year; a brief note in the April 9, 1909 Issaquah Independent noted “Lillie Hosco [sic] arrived home Sunday evening after an absence of several months.” At the time of the 1910 census, she was living in her family’s home and working as a chambermaid in a hotel. She had not left her delinquent ways completely behind, however. In November of 1910 she appeared in juvenile court again. This time she was assigned to the Home of the Good Shepherd, where she remained until April of 1912.

Home of the Good Shepherd

The Home of the Good Shepherd was established in 1907 in order to provide shelter, education and guidance to young women. The building still stands in Seattle’s Wallingford neighborhood; it is a registered historic landmark and houses a number of non-profit organizations.

In the early 1900s, half of the home’s 170-some residents were orphans; the other half were “penitents.” The wayward girls who made up the penitent ward were either referred by the courts or brought in by their families. The home operated a commercial laundry, which provided revenue as well as an occupation for its tenants. Mary would have worked in this laundry, whose two largest clients were the Great Northern and the Northern Pacific Railroads.

According to a HistoryLink.org article on the Home of the Good Shepherd, Mary Kranick and her peers would have studied “character education, voice, piano and other instrumental music, needlework, dressmaking, public expression, catechism, vocational training, basic academics, and physical education.”  For those girls sent to the home through the court system, the intent was to rehabilitate rather than punish.

When Mary was sentenced there, the school had only been open for just 11 months. She was still a resident there in April of 1910, when the census was taken. It is not know precisely when she was released. We do know that by 1911 she had married Elmer R. Cox. Cox lived with his family on 14th Avenue near Brooklyn Avenue, in what is today’s University District of Seattle. His father was occupied as a salesman in a clothing store. It is not certain whether Mary met him while a “pupil” at the Home, or after she was released. In any case the Cox home and the Home of the Good Shepherd were within an easy ten minute walk of each other. The couple moved to Tacoma, where their sons Frederick and Donald were born, moving to Oakland, California by 1920.

Although Mary Kranick’s experiences in 1908 separated her from her peers in many ways, her later life was much more similar to that of Bessie Cubbon, Mabel Ek, and all the others than any of them might have guessed in 1908. The last mention of Mary Kranick Cox in the Issaquah Press occurred in 1933, when she made a month long visit home from California to visit her mother.

Sources for this article include The Issaquah Independent and the Issaquah Press, Puget Sound Regional Archives court dockets, HistoryLink.org, and federal census records for 1910, 1920 and 1930.