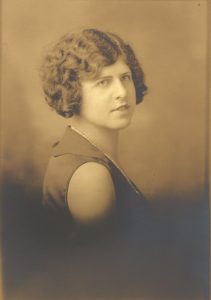 Ferol Tibbetts was an only child. Her parents owned an auto shop and were probably considered part of Issaquah’s “upper class” society. A year after Ferol graduated high school in 1921 she attended Washington State College (Now Washington State University.) Judging from her diaries of her time there she focused on meeting boys and spending her time having fun. The few mentions of actual academic activities were mostly theater and drama related. She moved back home to live with her parents after one year at college in 1923 – it’s unclear whether she ever graduated with any sort of degree.

Our closest connection to Ferol and her life lies in her daily diaries. She began keeping journals during her year in college. When she returns home her journals pick up in simple composition books. Ferol is fairly meticulous in her writings, however she often neglects to use last names which can make identification difficult.

The wonderful thing about these journals is that Ferol began writing these while in her early 20s. And since they begin in the year 1922 we’re able to see what “the roaring twenties” were like not only for a 20 year old female, but one who lives and has grown up in Issaquah.

Ferol’s diaries are almost exactly what you’d expect them to be – gossip, discussion of the boys she’s going out with, hair and beauty, friends. But there are unexpected moments – Ferol’s knowledge and experience with cars, her lack of enthusiasm for voting for the first time, and her attendance at the huge KKK rally in Issaquah (and subsequent interaction with the organization.)

The diaries of hers in our collection continue for at least a decade and we haven’t hardly made a dent in reading and cataloging them. We’ll continue sharing our discoveries past the window of LHM. Who knows what we will find!