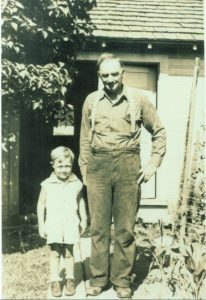 If you asked me what my favorite artifact in our collection is, I would have a difficult time selecting just one thing. I could probably narrow the field to 100 favorite artifacts. Included in that hundred is most certainly the Jake Jones, Jr. oral history.


Thanks to generous funding from 4Culture, we have been able to digitize, transcribe, and catalog more than 50 oral histories. Many of these were conducted in the last decade, but a significant number are much older, dating from the 1960s – 1980s. Recorded in 1958 by his grandson, Willard Krigbaum, the Jake Jones’ interview represents the oldest oral history in our collection.


Jacob Jones, Jr. was born in Squak Valley (as Issaquah was known then) in 1881. His parents were Mary Anderson and Jacob Jones, Sr. Jones the elder was among the earliest land-owners in Issaquah, having moved to the Valley in 1867. Jones, Jr. worked on the family farm in his youth and then became a carpenter. He married Leda Livingstone, and together they had a daughter, Florence. Florence’s son Willard began recording interviews with his grandfather after Jones was diagnosed with cancer. A year after the recordings were made, Jones succumbed to cancer.


Although the recording was made for the benefit of Krigbaum’s baby, who would not know his great-grandfather personally, it is such a gift to our community.


Jones’ oral history is unique because it provides a very rare first-hand recollection of Issaquah in the 1890s and early 1900s. In the excerpt below, Jones reminisces about Doc Gibson, a familiar figure in Issaquah history. I love the level of detail Jones provides – like the color of Doc Gibsons’s horses. The description of Doc Gibson tending to local shingle-weavers help describe the dangers of the logging trade in an era before OSHA and disability benefits. Imagine a time and place where it’s typical for a doctor to enlist passersby off the street to subdue a patient.


The full transcript of Jones’ interview is more than 60 pages long. You can read, search through, or peruse it here.


“Doc Gibson was the first doctor that came here to Issaquah.  He came in about 1888.  And he had, oh, he had a big district.  He had Carnation, and he had Fall City, and he had the upper valley, and down to the lake, down Inglewood, and North Bend, Snoqualmie and Fall City.


“And he had two chestnut sorrel horses that he used to ride.  He went night and day, any time.  He had all that district to take care of.  One time, there was a bunch of shingle weavers, and they cut pretty regular.  They’d cut their hands and cut their fingers.  Sometimes, they lost their arm.  And Doc had a chair that he used.  He put them in that chair – and when he looked around, he didn’t have much tools to work with.  He’d look around out on the street to get some young fellows to come and help him.  And so some of them couldn’t stand the sight of blood or anything, and they’d run.


“But he’d get about four of us that he used to get a hold of – sometimes some of those fellows was pretty husky and strong, you know – and he’d strap them in that chair, strap their legs and strap their arms, and he’d start to work on them.  Well, I helped him, oh, quite a few times.  And he always give me the ether cap [chuckles] to put on them.  And as they’d go out, they’d struggle pretty hard.  And boy, they’d make the old [inaudible] and he had the other three fellows to hold them in till they got enough ether to be quiet.

“And he’d watch, he’d tell me when to take the ether cap off.  And when they’d begin to come to again, he’d say, “Well, you better put it on again.”  He never got excited.  He almost … in the same way, he never got nervous or anything.

“Didn’t have much tools to work with.  He’d take and trim up their fingers, and cut the flesh back and saw the bones off and put the flesh on.  And he took four stitches, two one way and two across.  And he’d tie them up.


“And he had one great, big shingle-weaver.  His name was Bozo, and he was a brother of Bobby [inaudible], the world champion fighter at that time, a heavyweight.  And he was a very powerful man.  In fact, he cleaned up a whole bunch of them one night.  Three of them was going to pile on him and he them all laid out on the floor.  [laughing]

“But that was the hardest place.  Boy, he pretty near turned the till over and everything else with three holding him.  And I had the ether cap on him, and finally he got quieted down.  Doc fixed him up.  He took off the end of two of his fingers and I think his thumb.  That was one of his.


“Then, the train.  There were three men at different times fell off the big trestle here out of town and he took care of them.  And one fellow got his foot inbetween the railroad coal train and the couplings, the old-style couplings, and smashed his foot up, and then was [inaudible].  He got him in there and fixed up his foot.”

The Birth of the Seattle Biomedical Research Institute