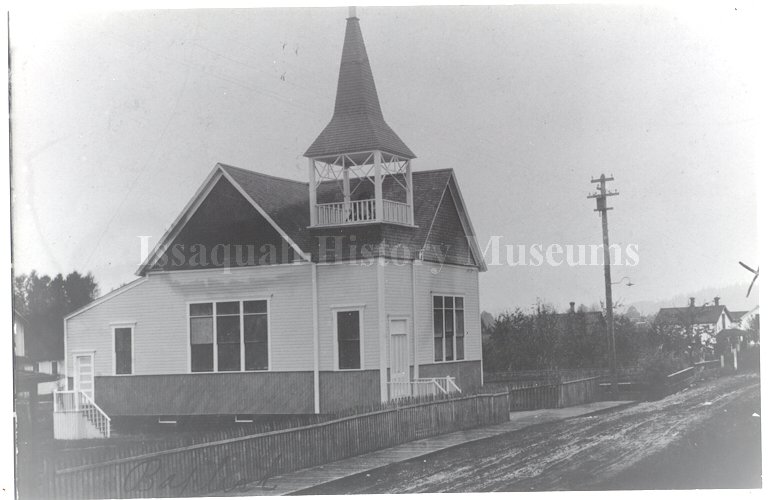 The original Baptist Church in 1911. It was located on Rainier, just south of the East Fork of Issaquah Creek and across from the Darigold creamery. This postcard was mailed on July 28, 1911. It was addressed to Mrs. Ruby McDonald, Carbonado, Wash. The text reads “Dear Ruby, Does this place look familiar?” It is signed “Mabel.” [IHM image: 72.021.014.080]

Take a walk from Issaquah’s Depot Museum past the city’s historic sites to Gilman Village, and you’ll wander by a relatively nondescript wood-shingled office building on the banks of East Fork Issaquah Creek. The Community Baptist Church of Issaquah once stood in this spot. It was here where Pastor Russell Hendrickson heard a rattling sound while walking to the church on the last Saturday of September in 1961. The sound emerged from under a hedge. Pastor Hendrickson couldn’t see what made the sound, but he was certain he knew what it was.

According to lifelong Issaquah resident Lenore Cutsforth Martinell “Pastor Hendrickson always said he was from Wenatchee and he knew what a rattlesnake sounded like!”

Issaquah isn’t rattlesnake habitat, but it has long been erroneously associated with snakes. Countless books, articles, and sites on the Internet confidently claim that the name derives from the word for snake in Lushootseed, the language spoken by the local Sammamish and Snoqualmie tribes.

The name ‘Issaquah’ actually derives from the Lushootseed word for the sound of water birds, and it was Whidbey Island’s Coupeville that was known as Snake Place (bǝc’ádz=ali) by the natives.

Issaquah wasn’t devoid of snake connections, however. It had its own Snake Valley on the Tradition Lake plateau. Before the plateau was extensively logged, large numbers of snakes gathered in masses to mate throughout the summers. In September of 1864, government land surveyors noted “the ground in this vicinity is almost entirely covered with various species of snakes.”

The surveyors most certainly met the common garter snake (Thamnophis sirtalis). Known as bǝc’ác by the local tribes, the garter snake is one of the most prevalent snakes in the area. The Snoqualmie used it medicinally, but also viewed it as a bad omen that could portend death. Although considered harmless to humans, garter snakes may bite when provoked and can inject a mild neurotoxic venom.

Wilma Nikko Hill, who was born in Issaquah in 1917, encountered them as a child in the field where Issaquah Fitness is now located. “I hated walking through the pasture because I was scared of snakes,” she recalled.

Ruth Hofto remembered one that resided in front of the school in 1916. “That is where we had to hop over a tiny little sliver of water where a garter snake tried to bite at you. He never left that spot.”

The local garter snake may be feared, but it has also earned a fond place in the hearts of many gardeners. The Puget Sound Garter Snake (T.s. pickeringii), also known as Pickering’s Garter Snake, eats slugs and rodents. The Issaquah variety, with its iridescent blue stripe, is arguably attractive as well as helpful.

As for that rattlesnake at the Community Baptist church in 1961, its presence was never confirmed. The Issaquah police and community residents didn’t doubt the Reverend’s tale, however, or the rattle at the end of it. They surmised that a rattlesnake must have arrived in a bale of hay shipped from Eastern Washington.

If you want to check out the site yourself, find your way to 623 Rainier Way N, the location of Issaquah’s original Community Baptist Church. To learn more stories about historic Issaquah, join an upcoming Downtown History Hike!