A generous grant from 4Culture is currently funding the digitization and cataloging of several archival collections, include the letters of Minnie Wilson and Jake Schomber, Issaquah residents and sweethearts. The couple corresponded during World War I, when Jake was serving in the Army. This post is part of a series of posts about their lives and letters. 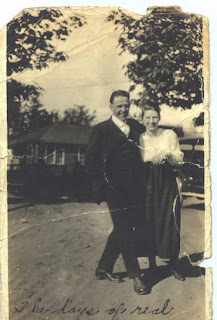 Minnie and Jake’s letters are quite similar in some ways. They both spend the majority of their time writing about how much they miss each other and wish that they were back together. I can only imagine how important it was for Jake, all alone in muddy Camp Fremont, CA, to receive these letters to keep his morale high.

But their letters are also very different. Minnie’s letters are great from a historical perspective – she provides excellent gossip and uses both first and last names in her letters. The news is pretty benign but the information is good for researchers and cataloging.

Jake’s letters on the other hand are definitely the entertainment pieces. At first you feel a little invasive reading some of the more “loving” parts, but as you dissect the subtleties of Jake’s language, you realize what he is really getting at – and it can get a little racy.

For instance Jake writes on September 2, 1918 “Oh dearest I am longing fore the time when I can hold my little girl in my arms again. But not like I used to. I want it to be different, I want you for my own, then I won’t have to kiss you goodnight at the door. It won’t be a good night kiss but a all night kiss. Won’t this be a grand old world then?” At the time Jake wrote this letter he was 32 and Minnie was only 21. I can’t imagine this was a letter Minnie shared with their families.

Another favorite moment points to the body image of the time. In Minnie’s letter on September 9, 1918 she mentions that “Everyone’s telling me I’m getting fat, not all in one spot either.” 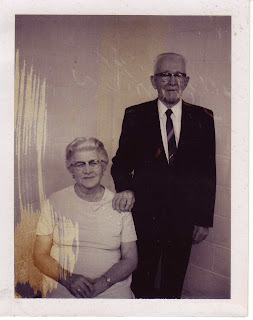 When Jake receives her letter on September 13, 1918, he responds with his own opinion:

“You said you are getting fat, that will help some. I want a nice little fat baby girl to meet me when I come home. I don’t meant for you to be flabby fat but if you are I will love you just the same. If you were fat I would have just that much more girl to love. But I don’t want you to get fat. Just as you are will suit me fine.”

It’s surprising how comfortable Jake feels telling Minnie his thoughts on her weight. Maybe he’s just trying to make her feel better, or maybe he really does feel this way. In another letter he tells her that he wants her “fat and sassy.” I think his true opinion really does boil down to his last statement: he just wants to be with Minnie.

Top 10 Records in the Digital Collections from 2013
1 reply