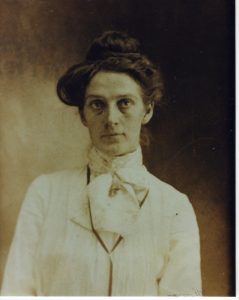 There are three instances of a single letter surviving from a correspondent.  One of these, from “Grandma & Mattie S. Woodin” is probably from Susan Woodin, who settled what is now Woodinville with her husband Ira.  In 1881 they were listed on the same page of the Territorial census as the Wolds.  From Grandma’s tone, it is clear that she had known the Bush family and Bertha for quite some time.  Writing on May 22, 1902, she wrote about the weather, disasters in other places, the hard work of dairy farming and managing calves, and family activities, including her son and his wife running a logging camp. She commented on a death and living arrangements for people in the extended Bush family.4  One particularly tantalizing reference in her letter reads, “Mrs. Ruth Bothell is our delegate you remember her don’t you She has been up to Issaquah several times mainly you knew her as Mrs. John Bothell.”  Records on Ancestry confirm that these Bothells lived in Bothell by 1900, when John Bothell died.  It would be very good to know what kind of delegate the Widow Bothell became—Suffrage?  Temperance? Something else?

A couple of the correspondents had been teachers in the Squak Valley.  Eveline Reed wrote from Phoenix, Arizona, on January 21, 1902.  The only record that I have found for her on Ancestry is her marriage to Everett Worsley Reed on April 28, 1897.  The Reeds moved from their home in the Pacific Northwest because of Eveline’s consumption (TB); they were both teachers, and she taught both before and after the move.  Everett’s health was also not good, as she documents in the letter, as follows:

I am very thankful that I was permitted to come here and don’t feel wicket about it as I did. For I know the change has saved my life, or at least lengthened it. I am feeling quite strong, but tired this week because last week Everett was quite sick so I had so much to do. I taught one day, besides doing everything else and nursing him too. He’s marvelously escaped having pneumonia, but I dosed him and kept him in bed so he is able to teach again. I was so worried.

Do you remember the days I missed teaching while there? I was so sick! As I think of it now I did act angry. I had not had a vicious attack for so long I felt I was surly going to die. I have not has such a time since. I believe that was the only day I ever mixed teaching on account of sickness. I believe I am a very healthy consumptive. If I could get rid of my cough, and not   raise any more I would be alright. I really look much healthier than the well women in this neighborhood.

TB is highly contagious and had riddled nineteenth century American society, passing from the sufferers to those who cared for them.5   With no medical cure available at that time, Eveline was one of many who moved to dry warm climate areas, or mountain areas, where clean air and a relaxed lifestyle were their best hopes for longer lives.  She and Everett still had their livings to earn, so they continued to work with children, probably spreading the disease.  She reported that many of her students were Mexican, and she was enjoying the Spanish language.

Nellie Palmer had taught in the Squak Valley before going on to more education.  When she wrote to Bertha in August of 1900, she had spent the summer studying and was getting ready to return to teaching.  Her letter was written from “Tremont, Wm.,” a location that I have been unable to locate.  Between her references to multiple mutual acquaintances having been in the same place she was, and her statement, “ I may go to the Falls one day this [week] if I do I shall watch for you,” this was probably a location within a day’s journey from Issaquah and Snoqualmie Falls—but that is just an educated guess.  Nellie’s name was common enough that I have been unable to track her in the area with certainty.  There was at least one teacher in Seattle by that name in the early 1900s.  We have no other records of her teaching tenure in Squak in Past Perfect or the Issaquah Family Tree.

Nellie appears in one other correspondent’s letter.  Alberta Ferry, who was originally from Pennsylvania, according to the 1910 census records, had moved to Seattle with her family.  She wrote to Bertha on November 13, 1899, sharing a mix of family news, information about mutual acquaintances she had seen, and questions about people in Issaquah whom she knew.  She inquired,

Does Miss Palmer still board with you[?  H]ow do the children like her[?] Mrs. A said they didn’t like her but I guess she doesn’t like it because she didn’t get her to board. Does Mr. P still go with her[?]

Although the Ferry family’s time in Issaquah and its environs is undocumented, it is clear from Alberta’s knowledge of the people in Bertha’s life that she had been there.  She corresponded with Earnest Pickering as well as with Bertha.  When she wrote to Bertha in March of 1901, she mentioned visiting with her the previous June.  Since that time, she and her parents had moved to Dawson City in the Yukon Territory. Through the rest of 1901 and into 1902, Alberta wrote four more letters in which she gossiped about life in Dawson and people she and Bertha both knew from Washington.  She worked as the secretary for a two-man law firm and did not plan to stay in Dawson much longer.  Census and city directory records show that she had moved to Fairbanks, Alaska, by 1909.  She was living on her own, supporting herself as a stenographer.  She was still there in 1910.

Alberta’s family and the school teachers were not the only people who passed through the Squak Valley on their ways to very different lives in very different places.  At least one of those other people, Walter Lorin Lane, wanted Bertha to go with him.

4. I infer from the groupings of names, cross checked with census and marriage records, that “Grandma” is Susan Campbell Woodin, Ira is her husband, Frank her son and Annie his wife. She also had a daughter Mary, who might be the “Mattie.” The Woodins lived in what was called Sammamish in 1880.

5. In the nineteenth century, “consumption” was common but devastating. Ralph Waldo Emerson suffered a major crisis of faith and left the Christian pulpit after it caused the death of his very young first wife.  Stephan Crane, the author, was one of many family members who died after being exposed by the dying cousins they took into their home.  One interpretation of his lifestyle is that he knew he was going to die young, so he chose to live hard.  The biographies of such prominent American literati show (and document, with their authors’ research), the impact that this particular disease had on the lives and deaths of people from all walks of life.

I know as much about TB as I do because my grandfather died of it, so I have paid attention to its presence in the lives I have studied.  Fly Rod Crosby, whose biography I wrote, also had TB, although she managed to live with it until she was 96.  In her case, it would go into remission when she could be outside in the summers and would roar back with a vengeance in the winters when she was stuck inside buildings heated by wood or coal.  Since she already had it in her body, it settled in an injured knee and brought a halt to her hunting and fishing days.  Today, according to Wikipedea,

One-third of the world’s population is thought to be infected with TB.[1] New infections occur in about 1% of the population each year.[9] In 2014, there were 9.6 million cases of active TB which resulted in 1.5 million deaths. More than 95% of deaths occurred in developing countries. The number of new cases each year has decreased since 2000.[1] About 80% of people in many Asian and African countries test positive while 5–10% of people in the United States population tests positive by the tuberculin test.[10] Tuberculosis has been present in humans since ancient times.[11]