Almost 10 years ago, I spent a good amount of time as a volunteer digitizing, cataloging, and sometimes writing about recipes in the Digital Collections of the Issaquah History Museums. But despite my fondest wishes, I never found time to try any of them out. Thanks to quarantine, I’ve now found the time.

A week or so into official quarantine life, my five year old daughter decided we needed to have “high tea” in the afternoons. Last Thanksgiving (it seems so long ago) we took our kids up to Victoria and had high tea at the Empress on Thanksgiving afternoon. High tea at home soon turned into an excuse to create and consume baked goods. And then I remembered the Wold Recipe Collection.

Vic’s Cream Muffins. Bert Horrocks’ Rocks. Mother’s Doughnuts. Most of the Garden. Titles of these recipes have remained lodged in my brain this last decade – in fact, I still have a document on my computer with transcribed recipes from the collection. Somehow I knew, somehow, someday, I’d have my chance.

We began with Vic’s Cream Muffins identified as from Victoria Ek. The best part of any vintage recipe (we’re talking pre-electric oven) is deciphering it. Sometimes handwritten, sometimes typed, often with errors crossed out or typed over, it can be a guessing game. Victoria’s recipe called for either ½ cup milk or 1 or 2 cups. We’d decide once we got there.

Mixing together the ingredients, plus ½ cup of milk, it became very clear I’d need more. One cup of milk seemed to do it. Now all I had to do was “Bake in muffin pan.” I decided to put them in the oven at 375° and checked them after 20 minutes. It took a bit longer, but eventually they were done. We had them at our now daily high tea. They were kid approved, especially with butter and jam. To me, they tasted like a dense, bun-like cupcake. Not bad, Victoria.

Next up, Aunt Lucy’s Brown Bread – which was identified by Harriet Fish as Lucy Ballinger. This was a delightful recipe to spend time deciphering. Sour milk and a handful of cornmeal. Cooking molasses and graham flour. And easily my favorite part: “Thicken tolerably.” What’s tolerable? Isn’t that different for everyone? How will I know if it isn’t tolerable?

For sour milk I used the old stand-by of adding vinegar to whole milk and letting it sit. I tossed in a handful of cornmeal. I used a mix of blackstrap molasses and honey. I had locally grown and milled whole wheat flour. I kept adding the flour to the mix until it seemed…tolerable? In actuality it was close to a quick bread batter. I baked it in a moderate oven (350°) and it took almost an hour. It rose beautifully and smelled delicious. 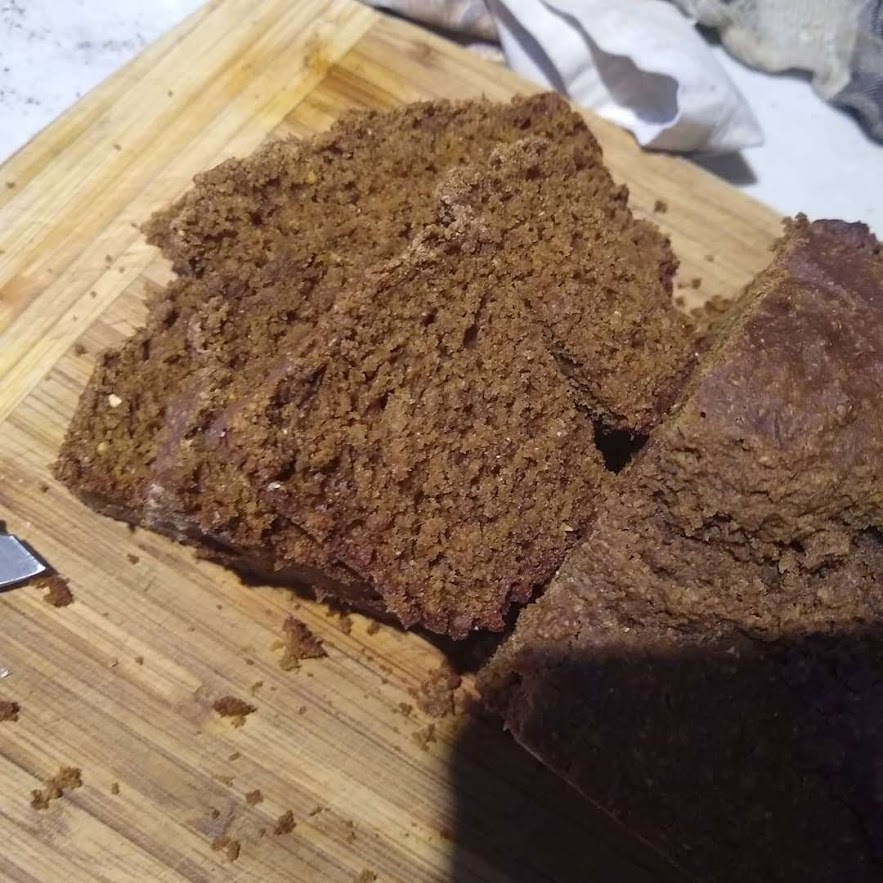 My five year old was not a fan. Not with butter, not with honey, not with jam. My eight year old son, however, devoured piece after piece. It reminded me of Boston brown bread from the can. Only, not can-shaped.

Lastly, doughnuts. Mother’s doughnuts. Mary, Sena, and Andy Wold’s mother to be clear – Henrietta Wold. This recipe was clearly missing an ingredient. I wonder if, like the brown bread, it was just a given I would be thickening things tolerably with flour. Vintage recipes from 100 years ago did not treat you like an idiot, I’ll give you that. No hand-holding, no YouTube videos – you just either knew how to bake, or you didn’t.

Turns out, I do know how to bake! And I’m quite good at it! Lucky me. I mixed up all the ingredients and added about 4 ½ cups of flour. 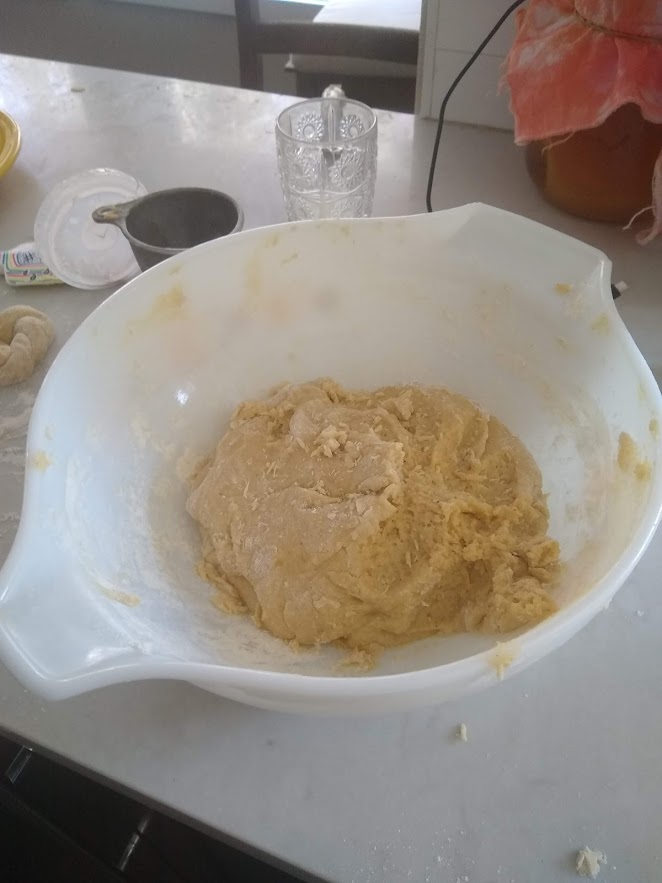 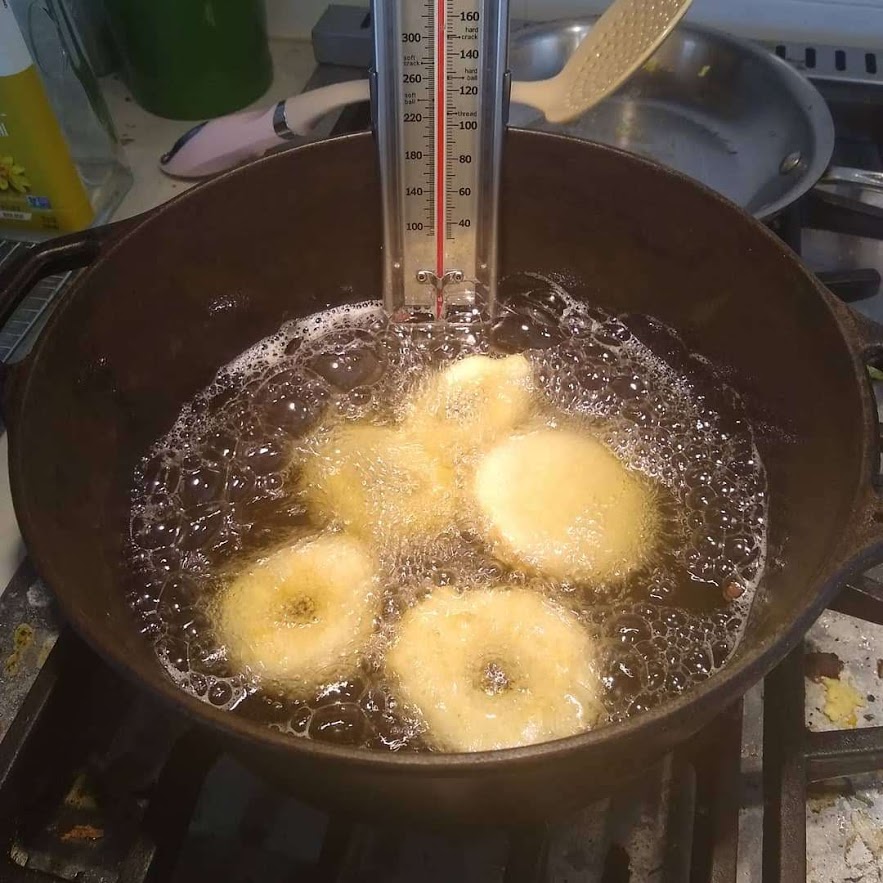 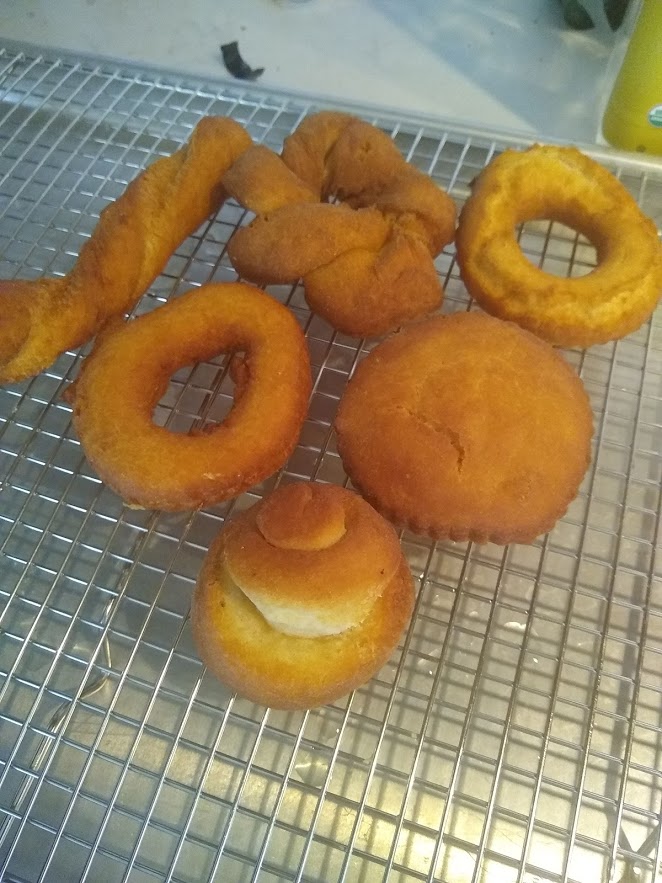 I set up my cast iron dutch oven on the stovetop with a new candy thermometer and set things to heating. A quick Google search recommended 375° for frying donuts, but I ended up hovering around 350° most of the time, and even that was a tad warm for the thicker doughnuts (browned too quickly, raw insides.)

I had a lot of fun trying different shapes. The recipe card itself has writing on it (Harriet Fish’s) and had a drawing of a cruller shape. I tried these and they were fine, but honestly, a traditional ring shape gave me doughnuts that looked just like “old fashioneds”.

I tried the first few test pieces and they were quite good! But I wanted to add something more, so a few got a cinnamon and sugar dusting.

Because I was already at it, I decided to take this to the next level. I made up a quick glaze with chocolate, butter, and a touch of corn syrup. I dunked some in, and then into some unicorn sprinkles leftover from my daughter’s cupcake decorating birthday party. I mean, does it get any more magical than a homemade doughnut with edible star sprinkles? Not particularly authentic, but pretty fantastic. (Sprinkles and their counterparts have existed in some form since the 18th century – so I’m not too far off base here.)

This recipe makes A LOT of doughnuts. They are delicious, and nothing like anything you’ll get in a store. They’re halfway between a yeasted doughnut and a cake doughnut. It’s possible these doughnuts were intended to be baked but I doubt it. Again, a quick Google search finds a number of vintage doughnut recipes with similar ingredients – all fried.

We’ve taken a pause on vintage recipes for the moment, but I imagine as this quarantine continues, I’ll find my way back to the myriad recipes available in our Digital Collections and try some more out – I’m looking at you, Bert Horrock’s Rocks.

Issaquah History Museums Reopen to the Public
Scroll to top