In honor of today’s sunshine, I figured this recipe called “Imperial Sunshine Cake” was a good choice. Hopefully it will entice the sunshine to stay out a little bit longer here in Issaquah despite the weather report saying otherwise.

This cake doesn’t have an author but it is handwritten. It may be a later recipe than some of the others because the instructions actually call out a temperature for the oven to be preheated to. There are other recipes out there for this type of cake – there are also recipes for “Sunshine Cake” and “Imperial Cake.”

The sunshine part seems to refer in other recipes to the call for some sort of citrus flavoring. In this recipe it just calls for “flavoring” and while you could use anything, I would recommend a citrus flavor. The 6 eggs in the recipe must make it quite yellow and would tie nicely with the citrus flavor.

The cake sounds perfect for a sunny afternoon. It’s a very light cake with only a glaze and not a heavy frosting. I imagine sitting outside in the sunshine having a slice with a glass of iced tea. Is it summer yet?

Method
Beat whites stiffly, slowly pour the syrup over them beating all the while and until cool. Add well beaten yolks. Fold in the flour which has been sifted with cream of tartar. Bake – Cold oven 325° 1 hour. 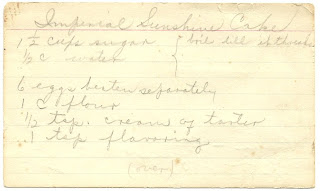 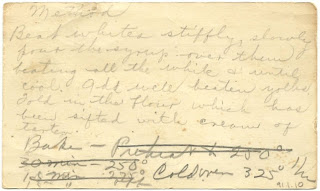 So Ya Wanna Do Some Research?

LHM: Ferol and her Automobiles