I have never actually had mincemeat and never really knew what it was all about until I saw this recipe. I’m curious to try it, if only because it’s so different than anything else I’ve ever eaten. This probably won’t be the first recipe that I try from Mary Wold’s collection, but it is worth sharing.

It is a traditional mincemeat recipe, with beef and suet. I’m not sure how readily available all the ingredients are – like suet and citron. But I imagine with a little research and maybe some substitutions, the recipe can be brought into the 21st century without sacrificing the original intent.

As with the other recipes there are some assumptions in this one. It calls for a dishpan of apples – how big is a dishpan? It also calls for jam and jelly or preserves. To me, jelly and preserves do not seem interchangeable. And as with “fruit juice” – what fruit are we talking about? Considering this and other recipes for mincemeat, I’d err on the side of apple or some sort of citrus.

There isn’t a clear author on this recipe – Harriet Fish labeled it Wold but we’ve found that her indications were not always correct. I imagine that the recipe had been passed down through the years considering more modern recipes don’t actually contain any meat. This recipe is actually very similar to a 19th century recipe I found online – which would be right in line with some of the dates of the other recipes in the collection.

Boil beef until tender, then grind thru food chopper with uncooked suet, apples and citron. Mix jam, jell, spices and all other ingredients together with a little of beef broth and boil, stirring often as it burns and sticks very easily.

It is done when apples are soft – I usually cook it down until it is the consistency of apple sauce. 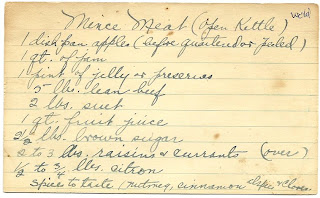 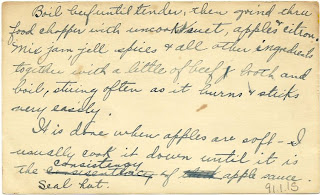 Recipe of the Week: Mother’s Doughnuts

An Opportunity to “Do History”

Recipe of the Week: Mother’s Doughnuts
Scroll to top