A generous grant from 4Culture is currently funding the digitization and cataloging of several archival collections, include the letters of Rodney and Vernon Anderson, Issaquah residents. Rod and Vern both served in the Army in the 1940s, and they wrote home to their mother regularly. This post is part of a series of posts about their lives and letters.

When Rodney Anderson was drafted into World War 2 he was placed in the United States Army Corps of Engineers, and began his training at Camp Abbott in Bend, Oregon. In Rod’s first letter home he says he is surprised that they didn’t put him in the Air Corps.

So Rod took matters into his own hands and, after covertly asking his mother for his birth certificate (he didn’t want to worry her), he applied to the Army Air Forces (previously called the Air Corps.) Rod was accepted into the AAF and moved to Sheppard Field in Wichita Falls, Texas. There he began his training.

Training sent Rod to Drake University in Des Moines, IA. College life seemed to suit him and his letters were happy and excited, talking of classes and coeds. After 1 month at Drake University, Rod received memo AFPMP 6122 titled “Army Ground Forces and Army Services Personnel.” The memo basically said that any men who had not yet fully completed AAF training were to be pulled from their training and placed back into Army Ground Forces due to a shortage in men. Rod wrote a disappointed letter to his parents on April 7, 1944 and included memo AFPMP 6122.

Here is the memo followed by the letter Rod wrote home to his parents: 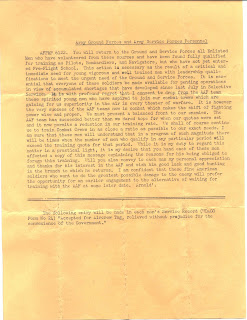 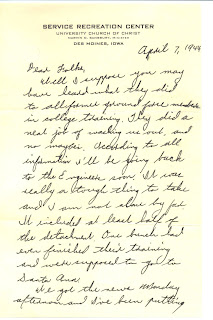 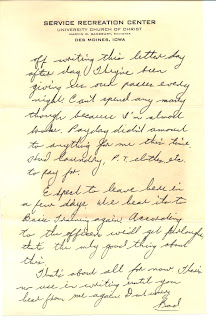 The memo is not a clear indication of why the men are being pulled from training. The memo indicates that there were “accumulated shortages that [had] developed since last July [1943] in Selective Service.”

In Vernon “Babe” Anderson’s (Rod’s brother) oral history, he speculated that it was a result of heavy losses during the Battle of the Bulge. So many troops were lost that they had to pull some out of training and send them back to infantry. But the Battle of the Bulge didn’t really begin until December 1944 – almost 9 months later.

Doing some research into the AAF during WWII indicates that enrollment reached its highest point in March 1944 at 2.4 million men with less than half being overseas. At that point men were sent back to the branch of the Army that they had come from due to a surplus. It is also important to mention that D-Day occurred only a few months later and men may have been pulled in preparation for anticipated loss.

Rod went back to the Engineers and had some good times in training near Los Angeles (stay tuned for a future post on all the wonderful things Rod saw in Hollywood.) He ended up overseas both in Europe and Japan and returned safely home.

The only remaining mystery I haven’t been able to fully decode is what “AFPMP 6122” stands for…any ideas?

Photo Analysis: Can you identify anyone?

Photo Analysis: What Roads are These?
1 reply

This NOT Just In: Great Seattle Fire Today in History: Monohon Lost to Fire
Scroll to top