A generous grant from 4Culture is currently funding the digitization and cataloging of several archival collections, including the letters of Minnie Wilson and Jake Schomber, Issaquah residents and sweetheart. The couple corresponded during World War I, when Jake was serving in the Army. This post is part of a series of posts about their lives and letters.

Finishing up in the series about Minnie and Jake is a different sort of letter. This letter was written to Jake post-WWI from an Army friend, H.J. Hurd, and is dated November 6, 1919. This was only a couple of weeks after Jake arrived home to Issaquah.

When I first started reading the letter, I thought it would be interesting to have an insight into what Jake’s relationship was with the men in his company – particularly people he was close to during his experience “over there.” The letter quickly delved into something different and I soon realized that H.J. Hurd was suffering from some sort of depression caused by his time in service.

This is the second paragraph from the letter:

“Well Jake old man, Liberty is sure a great thing but honest I’m lost since I came out of the service, don’t know what I want or anything, I stopped in Port[land] till Thurs night when I came from Lewis, got home Fri. morn. Went to work the next Monday but am lost all the time. I’m not interested in any thing don’t mind to work or anything like that, and don’t want to go off the ranch for any thing and haven’t very much either haven’t saw hardly anyone as I have stuck close to home, and haven’t had to tell much for I don’t talk much about my experience and I find there has been so much told that the best thing I can do is keep still.”

During WWI many soldiers experienced what was known as “shell shock.” Similar to Post-Traumatic Stress Disorder, shell shock is now called Combat Stress Reaction. Symptoms of CSR include: loss of initiative with fatigue, depression, extreme feeling of losing control, loss of adaptability, confusion and mistrust of others. There are many other symptoms, but Jake’s friend seems to fit the bill.

From paragraph three of the letter:

“Well I’m out of the notion Jake, don’t want any girls or any thing else. I don’t know what is the matter with me wouldn’t be surprised if I ended in the Army again for all I hated it while there but I’ll tell you there is some thing radically wrong some place. I can’t figure where it is but I’m not satisfied and don’t know what I want. If every one feels like I do there are sure a lot of fellows that are on the bum right since the War believe me. I’m no good to my self or any one else. Guess I saw to many bright lights and ect.”

This letter made me curious and a bit worried about H.J. Hurd’s future. Through some digging on Ancestry.com (my favorite thing to do) I found that Henry Jay Hurd, Jake’s friend, was born January 5, 1889 – only 3 years younger than Jake. I found both his WWI draft registration and a WWII draft registration. I couldn’t find any information on him being enlisted in WWII. He married about 5 years after he sent this letter – to a woman named Veva who was 11 years younger than him. In 1930 they were living in Portland. He worked as a mechanic and she as a grocery store clerk.

The letter ends with:

“Well you old ex cpl I would like to see you pretty well, I’ll tell the world of all my buddies, I had rather see you than any of them and I sure miss you old man. We were pretty good friends at that weren’t we?

Well I will bring this to a close hoping that you are well and better satisfied than I am. Write soon to your Old Buddy.

It seems through my research that Henry was able to get out of his “shell shock” but I wonder if he and Jake were ever able to meet-up again. I wonder if Jake was worried when he received this letter. I wonder if Jake ever experienced anything like this after he arrived home.

In my research of shell shock during WWI I discovered that in 2006 there were 300 British soldiers that were granted posthumous pardons for cowardice. These men were executed during WWI when they were discovered to have deserted. Through research and family campaigning it was discerned that a great deal of these men had deserted because they were suffering from shell shock.

The US Military did not execute for desertion after the American Civil War until World War II. Around 50 men were sentenced to execution for desertion but only one was carried out on Private Eddie Slovik. It is not clear if Eddie Slovik suffered any sort of PTSD, but he did experience combat and was later sent to the front lines. That is when he was found with evidence of intention to desert.

Click here for a link to a page with more information regarding the British pardon and executions for cowardice on men suffering shell shock.

Here are the scans of Henry Jay Hurd’s letter to Jake Schomber: 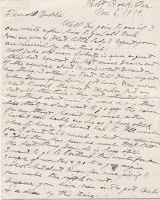 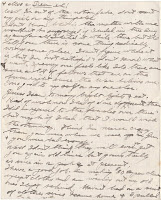 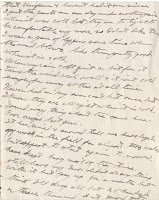 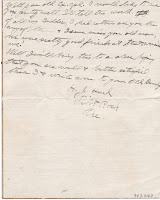