This week we received a request to help us identify the photograph above; the inquirer was planning to use the image for a magazine article and thought that it was probably Pine Lake, but wanted confirmation to be sure. I sent the image out to our members mailing list and we received a variety of replies. Although several people thought it was indeed Pine Lake, others were sure that it wasn’t. Because the photo caption stated that it was the opening of trout season, one person explained, it was not likely to be Pine Lake, which is too warm and shallow for trout. Another long-time resident on the Plateau thought it was unlikely to be Pine Lake because Pine Lake did not have a boat launch of that size. A third person said that it couldn’t be Pine Lake in 1962 (the year sited) because at that time, the area around the boat launch was heavily treed.

Other replies suggested a variety of lakes that it might be instead of Pine Lake. I compiled all the answers and sent them back to the author, not sure what he would make of them. It turns out he’d sent the image to a few other people for ID, and the Federal Way Historical Society (and the Federal Way maintenance staff) were unanimous in their agreement that the image is Steel Lake.

This turn of events is not unusual. Efforts to identify photos in our collection often result in multiple choice options when one person is identified with three different names by three different people.

The first lesson? Label your pictures! Twenty years from now there may be heated debates over who, where, or what is pictured in your snapshot!

The second lesson, for museum staff, is to record our line of thinking in the museum catalog whenever we make an educated guess. For example, the image to the right has the following catalog entry: 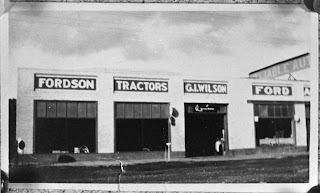 Eric feels and I (Erica) concur that this was not located in Issaquah. Although there was a Wilson Tibbetts who had an automotive agency, we don’t know of any G.I. Wilson. Also, the building behind the Wilson building has “Reliable Auto” painted across the side.  There were no businesses in ISQ by this or similar names, although there was a Reliable Auto Parts in Seattle for some time. Issaquah had very few commercial buildings that were two-story. Our guess is that this photo was actually taken in Seattle.

It would have been quicker to note “Not in Issaquah,” but fifteen years from now, someone looking at the catalog might be left to wonder, how do they know it’s isn’t Issaquah? who decided this? where is it, if not Issaquah?” 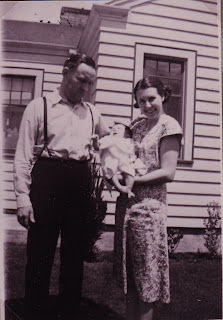 Along in the same vein are the identifying notes for the image at left:  Young couple with small baby…. Erica’s note: since this came in the same batch as photos of Jacob & Mary Wilfong, and appears to be taken in the same setting and on the same day, I suspect that this is Paul Wilfong and Hazel Wilfong holding their daughter.

Again, rather than just labeling the image with my suspicions, I recorded my line of thinking. This way, if it is discovered in five years that I am a mentally unhinged and/or legally blind, other staff members know that they need to go back and re-examine this (and many other) conclusions I’ve made.

But don’t panic. I’m pretty sure my faculties and eyesight are within the normal range. So far.

The Mystery of the Haunted Mansion

Photo Analysis: Can you identify anyone?