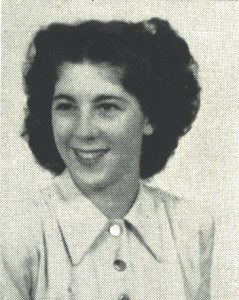 Donna Pedegana in her senior portrait, 1948.

Much is heard these days about the Great Depression of the 1930s, and how it might compare to the present day. Over a cup of coffee recently, Donna Pedegana Arndt, a lifelong Issaquah resident, provided a glimpse of daily life in Issaquah during the Depression era.

She was born at home in 1930 on what is now Andrews Street near the old Gilman Town Hall. She grew up in a coal miner’s family in an Issaquah where everyone knew where everyone else lived and didn’t have addresses or phones. They picked up their mail at the post office and identified their whereabouts by well-known landmarks. Arndt said she never understood why, later on, “you had to write ‘Issaquah’ on the envelope if you were mailing to someone in town. We always just wrote ‘City.'”

Arndt recalled some common values of the Depression era which she learned from her parents. Families were afraid of not having enough to live on, so they valued being debt-free and making things last. Arndt said many people were also “secretive,” wary of those who might take advantage of them. She often heard warnings against revealing personal news such as illness. “Don’t tell this out of the house,” they said. And especially, “Don’t talk about money out of the house.”

“In the Depression,” said Arndt, “if you didn’t have a job, you planted a big garden, because that is what you ate, and you went up in the woods and chopped wood for your fuel.”

“When people didn’t have enough money to buy groceries, merchants would let them charge things and never quite get the bill paid. The merchants really lost a lot of money. Later on, I thought it was really wonderful what they did,” she said.

Depression meals were made from “whatever was available.” Her family, the Pedeganas, grew corn, potatoes, carrots, bush beans, and cucumbers for pickling. They ate “a lot of spaghetti,” “boiling beef,” or chicken with noodles, and salted codfish which was soaked for two days before being cooked with potatoes in a cream sauce.

“Thanksgiving was not such a big thing as it is now,” said Arndt, although her family usually got together with relatives to eat dinner. A home favorite at Christmas might have been “ball soup,” made of small pieces of ham and bread cooked in a broth.

The school cafeteria served all 12 grades in the Depression, she remembered. High school girls helped serve a full meal of soup, salad, a hot dish and dessert. Belle Harris was the sole cook for many years, Arndt recalled, and sometimes cooked at home and brought the food to the cafeteria.

Clothing reflected the times. Girls had “only two or maybe three dresses, which they wore to school and then exchanged for play clothes when they got home. Boys and girls “had one pair of shoes for the year and if they wore through early, you lined them with cardboard. If your feet grew too fast, your toes were cramped.” She said men teachers often wore the same suit every day all year.

Arndt’s mother cut up her old clothes to make dresses for her daughter, but girls had to have new Easter dresses, no matter how few clothes they had the rest of the year, said Arndt.

For young girls, recreation was roller-skating on the cement sidewalks. “We would strap on our skates and be gone all day,” said Arndt. Everyone learned to swim in Issaquah Creek or down at the lake, though that was a long walk from town. “You wore the same one-piece suit all the time — you only had one.” Boys wore “trunks.”

Depression-era entertainment for many meant listening to the Seattle Rainier baseball games, broadcast on the radio by Leo Lassen from Sick’s Seattle Stadium. “If you walked up and down the street in Issaquah, you could hear the games through people’s open windows,” said Arndt. Issaquah also had a baseball team, organized by the Volunteer Fire Department, which played against teams in other towns. 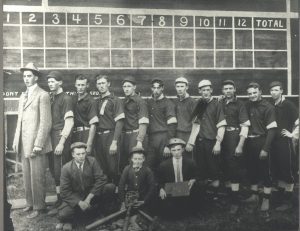 1910 Issaquah baseball team. Joe Pedegana is 6th from the left in the back row.

Arndt’s father was a baseball enthusiast. He had played on teams for Fall City and Roslyn in Washington, as well as Lewiston, ID and towns near Portland, Oregon. “His claim to fame was knowing the batting average of every player. Whenever there was an argument in a bar about some technicality about baseball, they would get hold of my dad to find out the real truth,” she said.

The effects of the Depression lasted a while. Arndt experienced more hardship than most, as her mother died when she was 12 and she had to keep house for her father. She remembered the help of Mamie King, who worked at the Red and White grocery store on Front Street, where the Front Street Market’s parking lot is now. King gave her ideas for dinner, helped her to select groceries and advised her about fixing meals.

When the Depression eased and World War II followed in 1941, the economy picked up and jobs were created, Arndt recalled. People in Issaquah became more prosperous. In high school, Arndt worked at a local restaurant, the Victory Inn, where she first met Bill Arndt, a veteran of the war in the Pacific.

They married in 1948. They ran Bill’s Cleaning Service in town, built a house off Newport Way where Donna still lives, and raised three children. Donna and Bill’s son, Roger, ran the business as Arndt Window Cleaning – in a much different Issaquah from the town she knew in the Great Depression.

The Mighty Alpines
Scroll to top