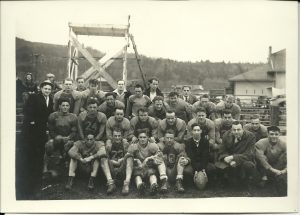 Long before Seattle had the Seahawks, Issaquah had the Alpines. In 1933 a group of young men, under the management of Ted Stonebridge, formed a local football team. During this time period between the World Wars, football was gaining popularity all over the nation. Teams were forming up all over the Puget Sound region as well, in Bremerton, West Seattle, Seattle, Renton… and Issaquah.

Issaquah’s team was referred to by a handful of different names during its life. When they first formed in 1933, their official name was the Issaquah Firemen – probably because the team grew out of the volunteer fire department, and because they played on Memorial Field, which had been cleared of brambles by the Issaquah Volunteer Fire Department. Hans Forster, manager of the Alpine Dairy plant in Issaquah, donated uniforms to the team in the 1930s. This patronage led to the name change from Firemen to Issaquah Alpines.

During the Alpines’ heyday, Issaquah was still a small town of less than 1,000 located on “the other side” of Lake Washington – before the bridge made for an easy commute. Issaquah may have been small, but the Alpines were mighty. Between 1933 and 1941, they were the Commercial League Champions seven years out of nine. During their first year, they were not only undefeated, but unscored upon. Today, the Alpines still have the honor of having the region’s highest ratio of games won to games lost. Mark Meadows of the Greater Northwest Football Association (GNFA) writes that the Alpines, “locked up their place as one of the nation’s most dominant football teams in semi-professional history, winning 62 games, losing four, and tying nine. Fifty-nine of those 75 games were shutouts, making the Issaquah defense one of the best ever over a nine-year span.” Two team members are also recognized by the GNFA as record setters.  Johnny Castagno’s record of 15 touchdowns in one season (1939) was not surpassed until 2004. Ellie Croston set a record for longest punt in 1939, with a punt of 91 yards. This distance has been beaten only once, in 1962, with a punt of 98 yards.

The Alpines’ record is even more impressive when you consider the team’s weight limit. The Alpines were in the under-160 lb class, which meant that all team members had to be below that weight to qualify. Although the Alpine team adhered to the weight requirements, other league teams did not. In one unevenly-weighted game, the Alpines faced off against the team from Grays Harbor, who had a 235-pound tackle and a 235-pound running back. In spite of their handicap, the Alpines came away with a 7-0 win.

By 1941, the Alpines had a healthy regard for their own abilities. They would not be intimidated by the posturing of their rivals, and neither would the community members who supported them. On September 11, 1941, the Issaquah Press announced that manager Ed Stonebridge had “received word that the big city on the other end of the big bridge is going to carry off the banner this year.” The Press claimed that this news “riles the fighting spirit of every football-minded man in Issaquah.” That “big city” could not make good on its brag and the Alpines came away with the League Championship again that year.

The community’s enthusiasm for the football games, and the football players, is reflected in other Issaquah Press coverage. Both Dan Kramer and Val Foubert wrote about the Alpines in the local paper, describing the games in colorful sports-speak. They conveyed the excitement of each Sunday afternoon game to those who were not fortunate enough to have been there – or those who wanted to relive the moment. Their coverage produced sentences like, “Schultz rocked and socked the line for three consecutive downs” and “Ken McLeod outjumped three interferers to gather in the pigskin for a tally” and “Stan Favini cracked open the line, bowled over the second line defense, and dashed up the sideline for fifty yards.” English teachers everywhere would have swooned at their use of active verbs. 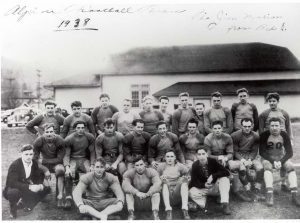 Like celebrated football players of the present day, the Alpines were young men in their prime, most of them around 25 years of age.  However, the Alpines worked hard all week (at the Alpine Dairy, or at other jobs) and some were married and supported families, as well. Playing football was a hobby for them, but one that they obviously took seriously.

In spite of their impressive list of wins, the Alpines were still a small-town team. Try-outs for the team were open, and notices in the Issaquah Press encouraged anyone who was interested to come and try out for the team, even if they didn’t live in Issaquah. The Alpines and their rival-of-the-week used the Issaquah Valley Fire Department Hall near Memorial Field as their locker-rooms. Viola White Petersen’s uncle, George Reini, was on the Alpines and Vi remembers selling tickets to the game on Sunday afternoons as a young girl. Friends and neighbors would gather at Memorial Field to watch the scrappy powerhouse of a team win against teams from all over the Puget Sound Region.

The Alpine team was a member of the Commercial League, which is also described as “semi-professional.” It is not clear which aspect of the team was considered “professional” – it must have referred to their skills and determination, because the team didn’t turn a profit and team members were not paid. In fact, they ran on a shoe-string budget. In October 1941, a notice in the Issaquah Press informed readers that “someone who had no business is doing so” had taken a “perfectly good ball” from the team during practice. The Press reminded readers that the Alpine team was a non-profit organization and suggested that the return of the ball would “simplify matters and certainly avoid future trouble.”

Issaquah Alpines football games were one of a number of things that united Issaquah’s residents 70 years ago. In 2001 the Issaquah History Museums hosted a gathering of long-time residents. Three men, all between the ages of 75 and 85, began to reminisce about the team, recalling plays as though they were yesterday. They could just as well have been discussing a game they had attended the previous weekend. Clearly, one of the Alpines’ greatest legacies is the ability to inspire great passion in both players and fans. Today, the Greater Northwest Football Association seeks to preserve that legacy. The GNFA recently launched a website on the history of local semi-pro football leagues, and the Issaquah Alpines are featured along with a number of other teams.

Interested in more photographs of the Issaquah Alpines? Take a look at more images (and identification of players) in our Digital Archives.