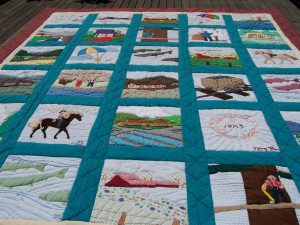 When artifacts come to the Issaquah Historical  Society, we often have a vague outline of where that item came from, where it has been, and what it meant to those who have owned it. In rare instances, an artifact comes to us with a long and detailed history. This summer we received one such item, a quilt accompanied by a remarkable story.

During the summer of 1983, 22 local quilters appliquéd and embroidered quilt blocks meant to represent aspects of the Issaquah community. Once pieced, the quilt would be raffled off during Salmon Days. Proceeds would go to Community Enterprises of Issaquah, to   support their work with the developmentally disabled.

Community Enterprises of Issaquah (CEI) was founded in 1977 as a community rehabilitation program. Its intent was – and is – to provide opportunities for individuals with developmental disabilities. Jean Harrington first suggested a quilt raffle as a fundraiser, inspired by a similar project in Port Townsend. Alice Paschal designed quilt blocks for the project. The patterns were distributed, along with fabric squares, to complete and return. When the squares had been returned, volunteers helped with the assembly and finish work of the quilt. During the weeks leading up to Salmon Days, the quilt was displayed at area businesses, and people had the opportunity to purchase raffle tickets to win the quilt. Monita Horn, who worked quilt blocks for the project from 1981 to 1987, remembers, “I kept hoping I would win the quilt, even though I have no place to display it. I would buy a whole string of tickets, but it never happened.” The quilt raffle was an annual event throughout the 1980s, with Paschal creating a few new blocks each year for variety. 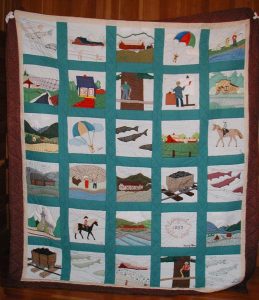 On August 24, 1983, a letter to the editor of the Issaquah Press from CEI Secretary Carol Harbolt reminded readers that, “… our very special quilt, designed by Alice Paschal, has been completed and is on display around town until Salmon Days… If you thought the previous quilts were beautiful, wait until you see this one.” Issaquah Press coverage of the 1983 Salmon Days celebration did not reveal the winner of the quilt raffle, and the quilt disappeared from the historical record.

More than 20 years later, Robin Abel discovered the quilt in a second-hand store in Renton. The quilt was in excellent condition and she recalls that something about it affected her. Although she didn’t have any ties to Issaquah, she bought  it.

Robin was in the midst of great turmoil in her personal life. Her daughter, Maria Federici, had been involved in a serious car accident in February of 2004, while driving home from work on I-405, Maria’s car was struck by part of an unsecured load from the car in front of her. She was lucky to have survived, and was left blind and seriously injured. Robin initially took a leave of absence from work to provide care for her daughter, and eventually had to resign to continue providing care. Maria had no health insurance, and her medical bills quickly topped $1 million. Because not covering your load was not considered a crime at that time, Maria could not apply for criminal victim compensation (Robin and Maria have campaigned—and succeeded—in having the law changed). By summer of 2005, Robin had exhausted her savings and was selling her possessions to pay for her and Maria’s basic living expenses.

While going through her collections, Robin found the 1983 Salmon Days quilt. She called the Issaquah   Historical Society offices to ask if they would be interested in purchasing the quilt. She said that she didn’t want to sell it to just anyone, and thought that the historical society would appreciate the quilt, and might be able to purchase it, or at least find a good home for it.

We sent out an e-mail to our friends and members and told them about the quilt, hoping someone among them might want to purchase it. But our members had a different idea. One donor offered a contribution and a challenge: if nine other people would contribute, then the quilt could be purchased for the IHS. Others quickly met the challenge, and the pledges flooded in, surpassing our goal by several hundred dollars. Within a week, we had raised $845 to purchase the quilt.

It is hard to tell who benefited the most from this transaction. Robin Abel and her daughter received help with their living expenses. The Issaquah Historical Society acquired a beautifully crafted piece of local history. And the wonderful donors who stepped in to make sure Robin had help, and the IHS had this quilt, received the deep satisfaction of knowing that they had made an amazing thing possible.

Do you have any information on the hand-pieced CEI quilts, or do you know who may have won any of the raffled quilts? Please let us know! Contact us at 425/392-3500 or info@issaquahhistory. For more information on Maria Federici’s recovery, go to www.mariasmiracle.com.

Tutorial: Finding People in the Digital Collections
Scroll to top