Today marked the first meeting of the Issaquah Quilters Guild at the Issaquah Depot. I’m pleased that the Guild has chosen the freight room as their new meeting space. I dropped by this morning to welcome them, to share some information about Issaquah’s history, and to show off one of the quilts in our collection.
Aside from their artistry and their use as a houseware, quilts played several roles historically. They were educational tools, providing hands-on experience in math and geometry. They were often an exercise in thrift, as scraps from other projects were combined to make something new. Quilts can also tell us a story, about the person who made it or the circumstances under which it was created.
The quilt that I shared with the guild members was a crazy-quilt created from scraps of different fabric. It is an unfinished piece, and the process of quilt-making is visible. Although the quilters enjoyed looking at the quilt (and provided me with more information about its construction), it was not the quilt I had intended to bring with me. Ahem. In order to minimize wear on the quilt, I didn’t open it before taking it to the meeting, not realizing that we had more than one crazy quilt stored in the collections. 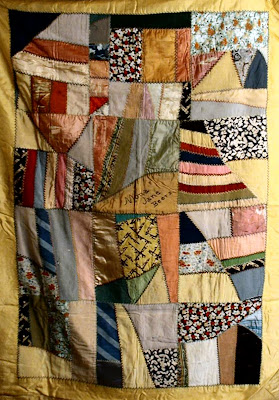 The quilt I intended to share with the quilters appears at left. It was constructed in 1932 as a baby quilt for Mona Jane Beers (whose name is embroidered in the middle of the quilt). The maker of the quilt was Jane (or Jennie) Usher.
Born Sarah Jane Lynch in 1864, Jennie grew up in Ohio. She met and married William Usher in 1881. Around 1898, William died, leaving Jennie a widow. Jennie went to live with her daughter, Edith Usher Beers. The household also included Jennie’s son-in-law Charles Beers, and grandson George. Around 1912, the Beers family moved to Issaquah. Charles worked as a mechanic at a garage and Edith became involved with the Issaquah Garden Club and the Order of the Eastern Star. Jennie Usher added to the household income by sewing. Scraps from the dresses and other garments she made were incorporated into quilts.
Mona Jane was George Beers’ daughter, and Jennie Usher’s great-granddaughter. The quilt was constructed in part out of scraps. It is a crazy quilt, although the scraps appear to have been pieced into twelve blocks of approximately the same size. The most interesting thing about the quilt, in my opinion, is the middle layer. Contemporary quilters use batting between layers of fabric; before batting, quilters used wool, felted blankets, or even old quilts as the quilt’s filling. Through some of the paler fabrics, it is possible to see the filling of this quilt — sugar sacks with the words “Pure Cane Granulated Sugar” printed on them. At the height of the Depression, Jennie Usher combined scraps and sugar sacks to create a beautiful heirloom for her great-granddaughter.
To me, this quilt tells a story of thrift, self-sufficiency, and making do in times of economic hardship.
If you’re interested in looking at another quilt that tells a story, visit the Gilman Town Hall Museum and view a Salmon Days quilt made in 1983.
Interested in renting the freight room for an event, meeting, or party? See our website for rental details.
https://secureservercdn.net/50.62.195.83/ozq.76d.myftpupload.com/wp-content/uploads/2010/01/Baby-Quilt.jpg?time=1620411567 400 279 IssqErica https://secureservercdn.net/50.62.195.83/ozq.76d.myftpupload.com/wp-content/uploads/2015/01/Issaquah-History-Museums1.png IssqErica2010-01-08 20:15:002017-04-28 10:45:38The Story of a Quilt: Mona Jane Beers’ Baby Quilt