On the morning of March 2, 1914, Henry Werner was found brutally murdered in his barn. During the next few days, authorities questioned Henry’s wife, Magdalena, and his son, Wilheim, about the events of that fateful morning. Eight-year old Wilheim told Seattle deputies that he was standing on the porch and heard men arguing in the barn. He wanted to investigate, but his mother told him not to go to the barn since it was probably Henry yelling at a cow. She later told authorities that she thought Henry was discussing a land deal with the neighbors and was not overly concerned by the shouting. Wilheim heard more yelling and told his mother again about the disturbance in the barn.

At this point in the narrative, there is a discrepancy in the newspaper accounts. The Seattle Daily Times reports that Wilheim found his father’s body and ran to the house to tell his mother. The Seattle Star explained that Magdalena saw a man running out of the barn as she approached the building and when she entered the barn she found her husband’s body.

Magdalena’s comments immediately after she found her husband’s body are also inconsistent. She told neighbors at the scene that she was so distraught over her husband’s murder that she took poison in an attempt to commit suicide. When a doctor arrived, she told him that she had not taken poison but fainted from the shock. She remained fragile and shaky for weeks after the murder and was, in fact, too weak to attend her husband’s funeral.

Neighbors told investigators that Henry and Magdalena argued two weeks before the murder, each threatening to kill the other. Henry threatened Magdalena with a knife, and she declared that she would kill him if he ever did it again. Magdalena denied threatening her husband and said that they never had any serious problems despite evidence that she had left her husband twice to look for work in Seattle.

On March 6, Marshal Elmer Baxter arrested an Italian man, Henry Paulone (aka Henry Smith). Paulone was held in the Issaquah jail pending the results of the coroner’s inquest. The Seattle Daily Times suggested that Henry Paulone and Magdalena were having an affair while The Seattle Star reported that Henry Werner found lover letters between Magdalena and various suitors at his house and gave them to his brother, who made them public after the murder, for safe keeping.

The love letters raised questions about Magdalena’s character. It seems she was not popular with her neighbors, who suspected that she had killed a number of dogs. One neighbor told The Seattle Star that he had gone to the Werner farm to see Henry when he saw Magdalena running from the house with a rifle in her hand. Before he knew it, she fired the gun, killing a small dog, and shouting “I’ll teach them to chase my sheep!”

Shortly after her arrest, Magdalena told a Star reporter that she knew the man who killed her husband and that he had committed the murder to protect her. She hoped that he would escape punishment because he only killed Henry to end her torment and suffering at the hands of her husband. According to Magdalena, her life on the Werner farm was lonely and miserable. The farm was about nine miles outside Issaquah (near Beaver Lake), and Henry did not allow her to go anywhere. She claims to have asked him for a divorce, as long as she could keep their four children, but he refused to consider divorce. Adding to the isolation of farm life, Henry was 26 years older than Magdalena. The Seattle Star printed an article speculating that this age gap contributed to the turmoil in the Werner household.

After her arrest, Magdalena became increasingly despondent in jail. She wouldn’t eat or talk to anyone. Out of concern, the prison matron allowed her infant daughter, Agnes, to take up residence in her mother’s jail cell. Agnes, living with her mother in the jail, brightened Magdalena’s spirits. This living situation, however, was short lived as Agnes was sent to live in a juvenile detention center after a month.

On March 10, authorities announced a new suspect Frank Piconi (aka Roderigo Rocco) and offered a $500 reward for his capture. There were sightings of Frank near Centralia, and people all over Northwest Washington searched for Frank. He was finally captured and arrested in Cle Elum on March 13. Evidence against Frank was a blood-stained knife and handkerchief found in his cabin (although some reports said that these items were found on his person). One particularly damning piece of evidence was his conversation with Joe Frejelli, a Cle Elum shoemaker and former friend. According to Joe, Frank asked Joe for a place to lay-low because he wanted to hide from some trouble he had in King County. Joe refused to accommodate Frank and called the authorities. The primary evidence that led to Frank’s arrest was Magdalena’s confession that she paid Frank Piconi $100 to kill her husband.

While Frank denied any knowledge of the murder, the sheriff orchestrated a dramatic encounter between Frank and Magdalena for the purposes of positively identifying the man she hired to kill her husband. On March 14, the sheriff brought Magdalena to his office for questioning and positioned her chair so that her back was to the door. A deputy entered unnoticed with Frank. The sheriff was asking familiar questions but suddenly asked, “Do you know that man?” Magdalena turned toward the door and gasped at the sight of Frank. “That’s the man!” she cried. Frank went pale and leaned on the door for support. After this positive identification, the sheriff was confident of a conviction. On March 24, Frank and Magdalena were arraigned on charges of first-degree murder. They both entered pleas of not guilty a few days later on March 27. 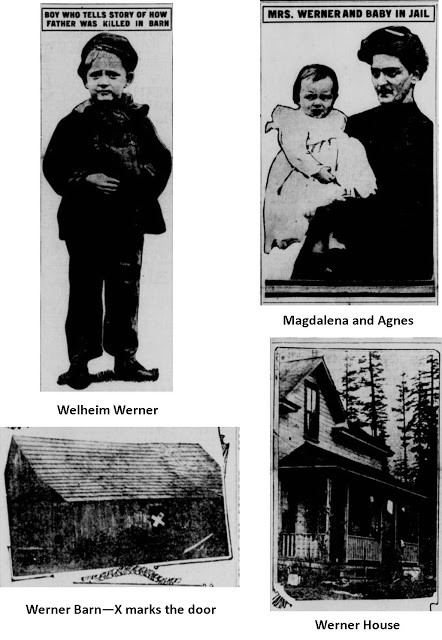 On April 13, the county sheriff received a death threat against Magdalena. The note was pieced together from letters cut out of the newspapers and warned that Magdalena would be killed if she testified against Frank. The sheriff did not take the threat seriously and destroyed the letter.

During Magdalena’s trial, evidence included her written confession (read aloud in court), the bloody mattock (murder weapon), and photos of Henry Werner’s body (over the objection of the defense). There were six men and six women on the jury. When the prosecution presented the murder weapon as evidence, Magdalena closed her eyes and one of the women on the jury seemed faint but regained her composure. Several key witnesses failed to appear to the dismay of the prosecution.

The trial was a media sensation and the hottest ticket in town. The courtroom was filled to capacity and the bailiffs had difficulty maintaining control of the crowd, both in and out of the courtroom. On the last day of the trial, people lined up for admittance at 7 o’clock in the morning and fought for seats when the doors of the courtroom opened. One row of chairs collapsed under the weight of the spectators, injuring three young women. In the crush to obtain a seat, one man lost $25 to a pick-pocket.

On May 22, the jury acquitted Magdalena in two hours and 45 minutes. The verdict shocked the prosecution because they had obtained a confession and other evidence pointing toward Magdalena’s involvement in the murder. The papers report that jurors shook Magdalena’s hand after the verdict, suggesting maybe the defense was successful in portraying Magdalena as a lonely and abused woman and the sympathies of the jury trumped the confession and physical evidence. After her acquittal, Magdalena applied for custody of her children and began looking for a job in Seattle.

After her acquittal, Magdalena moved to Kitsap County to working in a logging camp. There she met Benjamin Miller. In mid-August, the couple applied for a marriage license, but Magdalena’s notoriety caused them some trouble. It seems she had difficulty finding someone to act as her witness and vouch for her. She asked one of the deputies, who had testified at her trial, but he refused, saying that she would have to find a witness outside of the sheriff’s office. The couple apparently found witnesses because their marriage was announced in The Seattle Daily Times on August 19, 1914. After her marriage, Magdalena disappears from the records.

Frank Piconi’s trial began on June 8, with Magdalena scheduled to testify. The star witness, however, was 8-year old Wilheim Werner, who testified for a little over an hour. In a dramatic fashion, he identified Frank as the man who was seen running from the barn the morning of his father’s murder. After the boy’s testimony, the judge questioned him and became increasingly concerned that someone had coached him on what to say in court. For his part, Wilheim stuck to his story.

In early April, Henry Paulone was cleared of any involvement in the murder but remained in custody as a witness. On the stand, he gave testimony implicating Frank Piconi as Magdalena’s suitor and had been given a letter by Magdalena to give to Frank. Through an interpreter, Frank claimed his innocence saying he had no reason to kill Henry Werner and that he left Issaquah to go to Cle Elum to get a better job. He said he was at the house of a friend, Nick Garrish, at the time of the murder. Nick could not be found to testify, but the prosecution had an affidavit from him denying Frank’s claims. Magdalena provided the most helpful testimony at Frank’s trial when she failed to identify him as the man running away from the barn.

At the conclusion of the trial, the jury asked the judge if they could present their verdict directly from the jury box, but the judge denied the request and required them to deliberate in the jury room. After about 20 minutes, the jury came back with a verdict of not guilty. The jury appears to have believed Magdalena’s testimony rather than her written confession, which implicated Frank Piconi. On June 13, The Seattle Star ran the following blurb: “Now the Henry Werner murder, after two trials, is just as much, if not more, of a mystery than ever.”

In October, Frank Piconi sued the Seattle Post-Intelligencer for libel, asking for damages of $25,000 (or $45,000, depending on the report). The newspaper tried unsuccessfully to have the case thrown out, and the case was set for trial. Unfortunately, the results of the suit are unknown. It may be that Frank settled out of court, and the settlement was not reported in the papers.

Frank Piconi died at age 63 in Seattle and was survived by his wife, Mary, and son, Angelo. An obituary for Frank Piconi appeared in the May 24, 1951 Seattle Times, matching the state death records for the same Frank Piconi of the Werner murder.