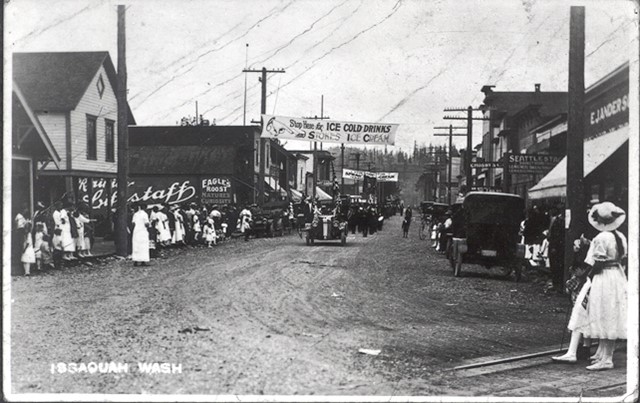 It’s finally 2021 in Issaquah, and it seems we have survived the worst year ever!  Our Country is sharply divided politically, economically, racially, and in other ways. Even the truth is divided into “facts” and “alternative facts.” With an influenza pandemic raging, adults and children alike are working and studying from home.  Anger and emotions run high, and we wonder, was this the worst year ever?

As I wondered, I looked up the last big pandemic that blasted its way around the world 100 years ago.  The conditions between then and now are eerily the same.  There was the influenza pandemic, of course, but also racial tension, women’s rights issues, a huge disparity in wealth, severe unemployment, strikes, contempt for President Wilson, protests, terrorist threats and fallout from WWII.  Even the details, like a shortage of masks, ventilators, hospital beds and staff, plus piles of caskets were all problems then as now.  550,000 victims died in ten months in our Country, and people thought it might be the end of human life on earth.

With the election of 1920 citizens just craved “normalcy,” the same word that we used today, as we voted for Joe Biden.  Warren G. Harding won the popular vote by 7 million in 1920, the same number as Biden in 2020.  It’s so fascinating it deserves a book, not a blog to cover it.

But locally, in Issaquah, it was different.  In 1920 Issaquah was still a farm community with a population of around a thousand folks.  In checking the Issaquah Press, I found headlines mostly for farm commodities during that time.  The price of eggs and dairy made the front page, as did a wedding, an accident, or an arrest.  The War and the Pandemic were usually buried on the last page.  One report in the Press stated that Issaquah had 15 cases of influenza at one time.  I think they thought that was a lot.  Dr. Gibson, the local physician, reported that the best preventatives are a cheerful mind, a well-nourished body, and keeping warmly clad.  The State Commissioner was telling everyone to wear masks, conflicting messaging, like today.

One hundred years later Issaquah has made a giant leap into the middle of the National and even International scene with giant corporations employing our citizens. We connect, because we are immersed in the development and use of new technology. We are impacted by global conditions anywhere and everywhere.  Issaquah can’t avoid change now.  We are in the thick of it.

What’s going to happen next?  The “Roaring Twenties?” In the 1920s new communications connected the Country with telephones, radio, movies, and the widespread use of the automobile. People were amazed; it seemed like magic.  Lifestyles changed with independent thinking, more freedom, shorter skirts, and all that jazz.  In Issaquah they even replaced the plank sidewalks with concrete.

In 2020 the serious challenges are here with communications, climate change, huge economic disparity, massive global unrest, and the space age.  Will we rise up to the challenges as they did 100 years ago?

For the nation, 1920 was really a low point, but perhaps Issaquah was insulated from the worst of it back then. Now it’s different, and 2020 for us just might be the worst year ever.  At least that’s what my neighbors think.  Maybe the rest of the world hasn’t changed, but Issaquah has.

References: Wikipedia, The Past at Present by Edwards Fish, and the Issaquah Press, 1918-20

Statement in Response to Violence Against Asian-Americans
Scroll to top