In Summer 1919, Mr. Fred S. Tibbetts and his wife, Elnora Polley Tibbetts (most often called Nora), set out on a cross-country road trip to visit Fred’s father and mother. Traveling to Florida along with Fred and Nora Tibbetts were their children George, age 15, and Mildred, age 12. After their arrival in Florida, Nora wrote a letter home that was excerpted in the Issaquah Press on January 2, for the benefit of the community.

Fred’s parents, George Washington Tibbetts and his wife Rebecca, had purchased property, including orange groves, in Apopka, Florida circa 1913. (The home, located at 21 East Orange Street in Apopka, is known today as the Mitchell-Tibbetts House and is on the National Register of Historic Places). Since that time, the senior Tibbetts had been spending winters in Apopka and summers in Issaquah. 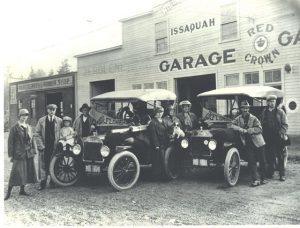 The Tibbetts family had a pronounced affection for automobiles, and automobile travel. Fred’s father, George Washington Tibbetts, had organized one of the earliest family road trips in 1916, leading a two-car caravan over the brand new Snoqualmie Pass highway. The trek from Issaquah to Florida reportedly took 40 days. Ida May Tibbets Goode, Fred’s sister, kept a diary along the way. 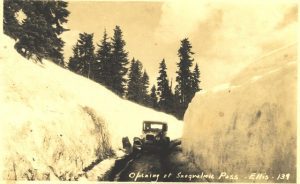 The journey was as much a triumphal march as a road-trip. The year prior, George W. Tibbetts had drafted the bill for a Snoqualmie Pass highway and pushed it through the State legislature. The resulting gravel highway was the first to cross the Cascades. A postcard commemorates its opening in 1915. With the opening of the pass, Issaquah became a landmark on the path through the Cascades.

Another early adopter of the automobile was Fred Tibbetts’ brother Wilson, who owned and operated the first automotive dealership in Issaquah. Wilson’s daughter Ferol would grow up admiring and driving a variety of cars.

Fred and Nora Tibbetts also owned a car. This was unusual in 1920, but would not be for long. Over the course of the next 10 years, Americans would purchase more than 26 million automobiles and 3 million trucks. Commercial enterprises were early adopters. As early as 1914, Lorenzo Francis was running passengers from Issaquah to Seattle in a Stanley Steamer car. Other auto stages followed. By 1925, Northern Pacific closed the Issaquah Depot’s waiting room and stopped offering passenger service. Local auto stages could offer speed, economy, and variety of arrival and departure times, and passenger rail couldn’t compete. 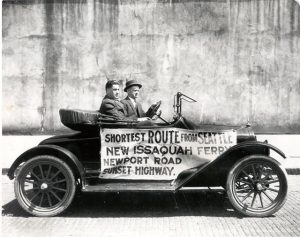 Name Game – What to Call The City?

The 1918-19 Influenza Epidemic in Issaquah
Scroll to top