Ruth L. Sylvester   August 6  —  Ruth was born in 1878, but the records conflict as to whether she was born in April or August.  She was Edith’s older sister.  She may or may not have come to Issaquah when her family moved from Cleveland, Ohio, to Gilman.  Her father had already been working as a “Railroad Secretary” in Cleveland, and he was the first station agent in Issaquah.  The Depot, or station, was built in 1889.  In 1896 Ruth’s mother died in Gilman.  By 1900, the U.S. census lists Ruth, but only Ruth out of W.W.’s children, living and going to school in Beaver Dam, Wisconsin.  She lived with her father’s  mother , his widowed sister, and other relatives and boarders.   Ruth married William Gamble in Wisconsin in 1909, but they eventually moved to Seattle.

Lois Hackett   January 11, 04  —  Lois Hackett was born in 1887 in England, so this may be the date on which she completed her square for the quilt.  Her parents were John and Sarah Hackett.  They emigrated from England and were living in Gilman in 1900. Her father was an engineer and probably worked in the mines.  Lois would marry John Jacob Eastlick’s first cousin, his mother’s nephew, Roy Vaughan, two years later.  We do not know of a close connection between Lois Hackett’s family and that of George Hackett, Alice’s husband, but both Hackett families emigrated from England to the Newcastle-Gilman area. 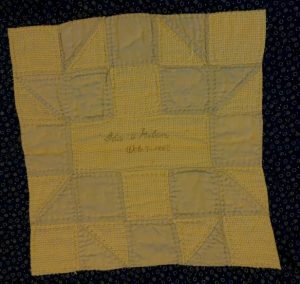 Ida M. Gibson  October 7, 1868  —  Ida McDonald Gibson was married to John Gibson, who was the pharmacist in Issaquah.  This date is her birthday.

S.S. Gibson March 27 – Is she related to William and John Gibson’s family? We have been unable to make a positive identification, but William and John had a sister named Sophia who never married.  Tracing her through census records, she appears to have lived her whole life in Pennsylvania, where the family lived in the first half of the nineteenth century.  Her death record lists her birthday as April 1, 1842, but that is only four days off March 27, and birthdays are sometimes miss-recorded.  The 1910 census records Sophia as the head of household in Pittsburgh, with the rest of the household consisting of three of her unmarried sisters and one of their brothers, who was also unmarried.  Sophia was sixty-eight; the rest were in their forties and fifties.

Lizzie McCloskey  [no date]  –Elizabeth McCloskey, who was born in 1878, was the daughter of Peter McCloskey Sr.  He was a farmer, and he donated the land on which the original St. Joseph’s Catholic Church in Issaquah was built.  She never married.  She died in Issaquah in 1955.

Katie McCloskey   [no date]  —  Katherine McCloskey, Elizabeth’s younger sister, was born in 1879.  She married James William Gregory, an Irishman, in 1922.  They made their home in King County and raised one son.  She died in 1963. 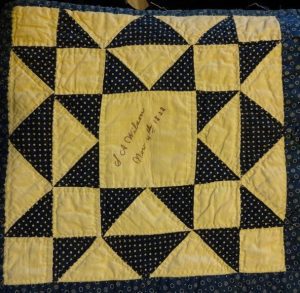 S. A. Wilson   November 4, 1822  — Sarah Ann McPerson Wilson was born in Missouri and came to the Squak Valley along with her husband and three of their adult children in the 1880s.  Her daughter Sevilla married William Pickering, son of the one-time Washington Territory governor and Issaquah landowner and farmer.  Daughter Rebecca Ann had already married George Washington Tibbetts in Missouri, and they, too, settled in Issaquah.  Son Robert married in Indiana, and he and his bride joined the family in Issaquah, where they raised their daughter, Bessie. Bessie’s autobiography, published as the book, Squak Valley, provides one of the clearest pictures of life in the valley before 1900.

R. A. Tibbetts   August 15, 1849  —  Rebecca Ann Wilson Tibbetts, Sarah Wilson’s daughter,  was born on this date in Moniteau, Missouri.  She married George Washington Tibbetts in Carthage, Missouri, in 1868, after he left the army, having served the North in the Civil War.  About fifteen years later, the couple moved to Issaquah, where George built a hotel and store, and where they became prominent citizens.  They were very active in Grand Army of the Republic affairs, and for a time they moved to Orting, where he was the Commandant of the Washington Soldiers Home for veterans. 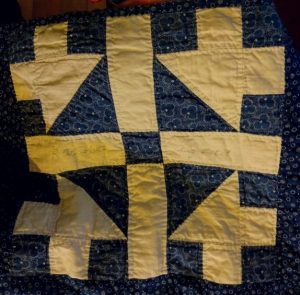 E. Polley September 15, 1904 —  Elnora Polley’s birthday was September 15, 1881, but she was probably looking forward to her own wedding, which would be on that day in 1904.  Her family had moved from New York to Washington when she was three, and they were living in Renton by 1887.  Her intended was Frederick Solomon Tibbetts, son of George Washington Tibbetts and Rebecca Ann Wilson.  By 1900, her mother was dead and she and her teenage brothers were living as a household in Gilman. 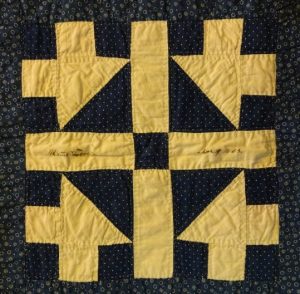 Mattie Tibbetts   April 19, 1883  —  She was born Mattie Ray on or about this date (records conflict), in Missouri.  Her family moved to Issaquah prior to 1900, and she married George Wilson Tibbets, son of Rebecca and George Washington Tibbetts, in December 1901.

Mrs. Thilda Becker  March 19th, 1868  —  Mathilda Swanson (also known as Thilda Tuverson) was born on this date in Sweden.  She and several of her siblings immigrated to the United States in the 1880s.  She met fellow Swede Louis Becker on board ship, and they married two years later.  By 1890 they were living in Issaquah, where they raised five children.  He worked as a miner and she operated the Hotel Stockholm on what is now Andrews Street, a few doors down from Dr. and Mrs. Gibson’s house.[3]

Christina Anderson  November 23, 1864  —  Christina Johnson Anderson was born on this day, but records indicate that the year was 1862.  She emigrated from Sweden in 1886 married Tolle Anderson two years later in Gilman.  They lived on their farm on Rainier Way, where the Cybil Madeline Park is now, close to where Lucy Stevenson’s shop was located.

Next: Friends from Other States

Previous: The Issaquah Community, Part I

[3] There is a brief biography of Thilda Becker in the IHM Research Center B-0000-009, which is a copy of the Hoye Becker Family Scrapbook.