By the time Willa and J.J. married, people had been moving into the Squak Valley from other parts of the United States, and directly from Europe, for forty years.  The community numbered about 700 in 1900, counting all ages, and some of those people were the third generation of their families to live in the area.  The quilt contributors came from both the earliest settlers and more recent incomers.  When we look at the relationships between many of the donors, we see a community held together with family ties. 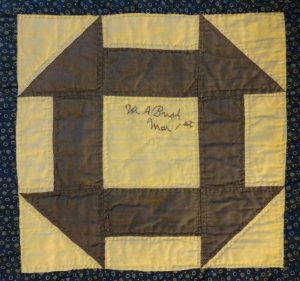 M. A. Bush   March 1 – Martha Ann Stewart Bush was the ultimate early settler.  Born on March 1, 1835, in Covington, Indiana, she married James William Bush in Corvallis, Oregon, in 1854.  The young couple moved to the Squak Valley in 1863 and survived the night of the Indian raid in which another young  couple in the valley, the Castos, were killed.

Emily Darst   March 26 – The daughter of Martha S. and James W. Bush, was born on March 26, 1860, in Seattle  and moved to the Squak Valley as a very young girl.  She, too, survived the Indian raid.  At the age of 16, she married Cyrus Darst. They raised their family and lived out their lives in Issaquah.

Inez Stella Darst   November 11 – The granddaughter of Martha Stewart  Bush, daughter of Emily Ann Bush Darst and Cyrus Darst, Inez was born on November 11, 1877, becoming the a member of the third generation of this family to live in Issaquah.  Already an adult at the time the quilt was made, she would marry Marcus Gunderson the following year, when she was 28. 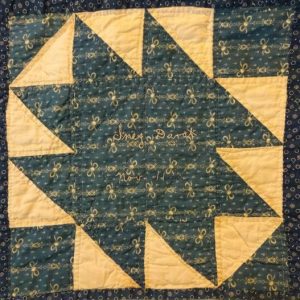 Aunt Mattie  November 3  — Martha Alice Bush was commonly called “Aunt Mattie” in the community.  The youngest daughter of Martha Stewart Bush and James William Bush, she was born in Georgetown, Seattle, on November 3,  1862, and came to the Squak Valley with her parents in 1863.  As was often the expected role of youngest daughters in the nineteenth century, she remained single all of her days and lived for many years as her mother’s companion.

B Baxter  [no date] —  Bertha Wold Baxter was another of Martha and James Bush’s granddaughters.  Her mother was their oldest child, Mary Samantha (usually called “Samantha”) Bush Wold Prue.  Bertha was born on January 6, 1877, in Ellensburg, but her parents were both early Issaquah Pioneers, her father being Peter Wold, one of the three Wold brothers who once owned the land where the intersection of Front St. and Sunset Way is now.  Peter moved his life to Kittitas County, but his marriage to Samantha ended by 1880, and she and her daughters returned to Issaquah.  Bertha grew up spending time with her aunt Emily Darst’s family and with her grandmother Martha and Aunt Mattie, in Issaquah, as well as with her mother’s second family in Fall City.  She married Charles Wesley Baxter on Christmas Day, 1902, and settled into housekeeping in Issaquah.  The Baxters had two sons and a daughter, and their daughter, Beryl Baxter, would become the best known quilter in the area. For extensive information about Bertha and her family and friends, see my blog post series, “What Bertha’s Correspondence Tells Us. . .Or, I Know All the Hot Issaquah Gossip from 1902!”; this is based on a collection of letters all written to Bertha that now comprises a major portion of IHM accession #2015.10.

Agnes W. Hughes   [no date]  — may have been Mary Hughes Burke’s sister or other relative, or she may not.  With no birth date for Agnes, we cannot trace whether or not they came from the same family in Pennsylvania.  We have no further information about Agnes.

Alice McEachern   April 22, 1873  —  Alice Mary Cooper was born on April 22, 1873, in Illinois, the daughter of English immigrants Isaac and Sarah Jones Cooper.  By 1880 her family was living in Newcastle.  On February 18, 1892, she married John McEachern, who was then the station agent at Issaquah.  By 1900, her father was a saloon keeper in Issaquah.

Alice M. Hackett   May 8, 1878  —  Alice Mary Horrocks was born on this date in England, to James Radcliffe Horrocks and Molly Greenleigh Horrocks.  The family emmigrated to the United States around 1880 and settled first in Newcastle.  They relocated to Issaquah by 1890.  Alice married George Hackett in September of 1900, while he was Issaquah’s station agent.  George was Alice Cooper McEachern’s cousin; his mother was her father’s sister. 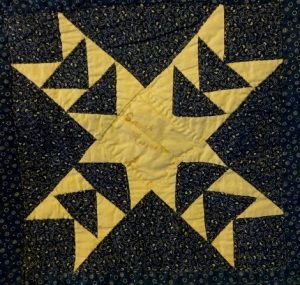 Sarah Horrocks   June 27  —  Sarah Horrocks was Alice Mary Horrocks Hackett’s  younger sister, born in Newcastle, Washington, in 1882 (exact date uncertain, but probably June 27), after her family had immigrated from England.  At that point, her father was working in the coal mines.  In 1907 she would marry local banker Warren Curtis Sylvester, son of the first station agent in Issaquah and brother to Edith M. Sylvester and Ruth L. Sylvester.

Edith M. Sylvester   May 17, 1881  —  This is her birth date.  The daughter of station agent turned bank founder W.W. Sylvester, Edith would marry George Bigelow in 1910, a decade after her father and brother, Warren, started the first bank in Issaquah.

[2] Information about the Issaquah community members is drawn from legal documents available on Ancestry.com and from the general collections of the Issaquah History Museums.

From the Digital Collections: Poem by William Udd

From the Digital Collections: “Twixt Cloud and Earth”