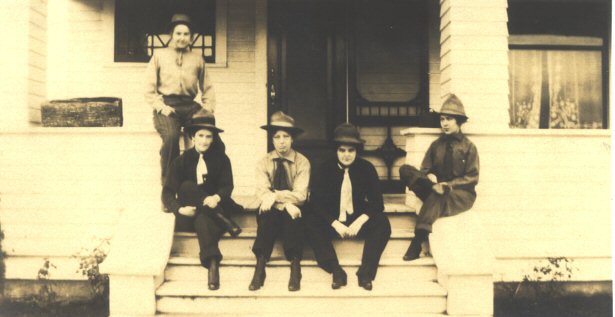 One of Issaquah’s newest recreation areas has been named Sena Park. Sena Park is located just off Gilman Boulevard, near the new Atlas Apartments. When completed, the small park will provide access to Issaquah Creek. The park was named after Sena Wold, who lived in Issaquah for the majority of her 77 years.

Sena Wold was the youngest surviving child of Lars Wold and Henrietta Walters, both immigrants from Scandinavia who made their way to what was then called the Squak Valley. Lars Wold, along with his brothers Ingebright and Peter, came to Issaquah in 1867 and established the first hops farm in the valley. Lars Wold owned 160 acres north and west of today’s Front and Sunset Way intersection. The Wolds’ 1908 home now stands in Gilman Village, the only building that didn’t need to be moved. Today it is home to the Farmhouse School.

Among the Issaquah History Museums collections is a photo album created by Sena Wold . It reveals that Sena was interested in animals from a very young age. Along with photos of dogs, cats, and domesticated birds, there are many pictures of Sena with one of her beloved horses.

The Wold children, boys and girls alike, were educated. Both Sena and her elder sister Mary completed their high school education, and went on to college. The Wold children all spent time in Seattle and were comfortable in both the city and on the farm. The photo albums they left behind show many group outings with friends to hike or picnic, and sorts of high-spirited fun. 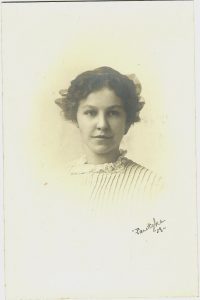 One of Sena and Mary’s projects was the Odd Old Maids Club. Originally started by Mary Wold and her friend Bessie Marsh, the mission of the Odd Old Maids Club was a mystery to most Issaquahns. The Issaquah Independent (today the Press) printed several anecdotes about the club, but seemed convinced that the purpose of the club was to catch husbands. For one meeting, the girls reportedly got up early, dressed in trousers, and went fishing. Another Odd Old Maids get-together featured adopting the names and costumes of fairy tale characters and having tea. Far from catching husbands, I suspect that the club was for the opposite purpose: enjoying the fun of being an old maid, unencumbered by expectations of marriage. The photograph of several young women on the front porch of the Wold House, grinning and in pants, seems to support my theory.

Like her older sister Mary, Sena attended Central Washington University in Ellensburg. While her sister became a teacher and worked in a variety of places, Sena stayed close to home. She worked for the Standard Oil Company in Issaquah for a time, but had established her own business by 1930: the Wold Poultry Farm. Sena was quite serious about this enterprise, and her hens won at least one trophy for their admirable egg-laying. (This trophy is now on display at the Gilman Town Hall, should you wish to admire it). In 1930, Sena traveled to London, England to attend the World Poultry Congress. This is remarkable, considering it was an era when travel between Issaquah and Seattle by train was worth a mention in the Issaquah Press. In her later years, Sena took up the training of German Shepherds, which raised the eyebrows of a few of her other female relatives.

Sena Wold never married or had children, and she lived out most of her life here in Issaquah. Imagine the changes she must have seen between her birth in 1891 and when she passed away, on June 3, 1968. She probably would have been surprised to see such tall buildings crowding around what was once her family’s farm. I hope she would be pleased to have a small part of that property set aside for recreation, and named in her honor.

The Werner Murder
Scroll to top