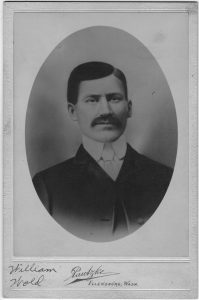 The earliest letters in the cache, from 1892, are from Bertha’s brother William.  She was fifteen and he was nineteen.  They corresponded until his death eleven years later, and sixteen of his letters remain.  William wrote a lot about the weather and the work that he was doing.  Since much of his work was in farming and hay press gangs, as well as digging irrigation ditches, the weather had a major effect on how difficult his life was.  William urged Bertha to stay in school.  He knew that his own struggles were in part due to a lack of education.   Although he mentioned some dances and baseball games, he wrote relatively little about social life.   He was more apt to detail the latest local tragedy or accident.  One running topic for brief comments, with tantalizingly little detail, was his father’s ongoing lawsuit.  Apparently Peter was in danger of losing his water rights, which would have a very negative impact on his agricultural pursuits.  The suit was continued from court sitting to court sitting for several years.  Meanwhile, Peter also engaged in mining activities, although William could not give details.  By 1899, Peter had sold all but forty-three acres of his holdings and was building a new house.  Peter was not the only Wold to deal with the court system.  William expressed sympathy for his Uncle Lars’s legal situation in both 1893 and 1900.  From other documents in our collections, we know that Lars had accumulated serious debt following the collapse of his hops growing and some unwise real estate transactions.  (See the introduction to IHM Research Center holding R-1913-001, RC-C2, for a precis of Lars’ legal woes.)

Fractured family dynamics were a driving factor in William’s life.  He left his home with his father after his father’s remarriage in 1890, writing bitterly in 1894, “I am not staying at home now or have not been all summer. [H]ome is no place for me anymore.”  In the same letter, he mentioned that “I seen by the papers some time ago that Grand Pa is dead which was a great surprise to us here.” This was James William Bush; apparently the Bush side of the family was not staying in communication with William or his father.  Similarly, family connections among the Wold brothers were not particularly close.  William wrote in January of 1893, “We were all surprised to hear of Uncle Ingebright’s marriage did he marry anyone you know. I got a letter from Hellen Christopher [a Wold cousin]. she said Uncle was married but never said who to.”

At the time the letters began, William had been out of communication with his mother for an extended period.  He asked Bertha in April of 1892, “what is Mother’s address or post office[?]  I wouldn’t know where to write to but I don’t know whether she would write to me now or not but I will try I ought to have written to her before[.]”

His lack of simpatico with his step mother was a repeated topic in his letters, even though he was generally inclined toward being a peacemaker.  He wrote with more sympathy about his and Bertha’s own mother, regretting what he perceived as her isolation and reputation as a difficult person. Even so, his opinion of her was rather back handed, as expressed in his letter of June 6, 1892 – “I think that they misjudge Mother. I don’t think she would let you die if she could help it do you[?]. . .it must be hard on Mother to stay alone always[.] When I come over we will go and [spend] a while with her[.  E]ven I cant say exactly when I will start but it will be the first spare time I can get[.] I haven’t written to Mother yet but will probably the same time I write this to you.”  He urged Bertha to be on better terms with her, as well as to think more kindly about their father.  William explained in his July 10, 1900, letter, “I don’t want you to think that Father or Mrs. Wold [William’s stepmother] has anything to do with my not writing to you it is all caused by my own carelessness and don’t blame your poor old Father for not writing for you know that he can’t write English and if he was to write Norwegian you would have to hire someone to read it for you. You have the finest father in the world and he thinks lots of you but owning to circumstances he can’t always do as he would like to.”  He frequently added a note of their father’s love being sent to Bertha in addition to his own.  He thought his father was beginning to look and act old.

William mentioned at least one long visit from their cousins Oscar, Helena and Nora Christopher.  He liked them, even while remarking on their relative affluence.  Genealogy research shows that they were related through the Wolds; their mother was Mary Wold Christopher, who raised her family in the Puyallup/Auburn area, in a district then known as Slaughter.  Her husband, Thomas Christopher, had been associated with Ezra Meeker and had been a successful businessman in his own right.1

William also knew Elmer Baxter, who had occasion to work in Ellensburg before he returned to Issaquah and became the town marshal.  William mentioned him repeatedly, which may indicate that he was aware of the growing connection between Bertha and Elmer’s brother, Charles, who would become her husband in 1902.

The letters provide no information as to whether William ever saw his sisters or mother again after Samantha returned to the western slopes of the Cascades from Ellensburg.  He intended to visit Bertha, writing  on April 10, 1892, “I will try and come over this summer if nothing happens I will come over and have a good time for I am a great fellow for sport and enjoyment -.”  He wrote the following January, “Father has never said anything of going over [the mountains to Issaquah] as I know of. I am sorry I never answered your letter but thought I would come over. but I worked on a ditch last fall for two months and have been hauling lumber and ice all winter so I ain’t had no time to go anywhere.”

His own work, in various forms of manual labor, including agricultural and mining, kept him on the east side of the mountains, in Ellensburg, the Palouse region, Walla Walla, Yakima, and even in Idaho.  He thought about moving to California or joining the gold rush to Alaska but changed his mind.   On May 5, 1899, he wrote, “I have been sick for the last 6 or 7 months but am alright and in good health now. I was up at the Silver Mines in the Coeur d’Alene, Idaho last summer and I got lead poisoned which came very near ending my earthly troubles for me[.]  I am not the strong healthy lad I used to be[.]  I now know what it was to be sick[.  B]efore I was at Wardner [Idaho—scene of major mining riots in 1892 and 1899] where the big strike is going on now.”  He spent the summer of 1899 working in the asphalt plant at Spokane.   Despite his claim of recovery, his health was severely compromised, and he died in 1903, probably in August or September, at the age of thirty.  He had never married, and none of his letters mention any special attachment other than “a lady friend.”  He had worked hard and often been discouraged.

William’s death was not well documented, and we had not known when he died, other than “prior to 1920” until we read Mary Wold’s letters to Bertha.  (Note that Kittitas County’s death records prior to 1907 are held by the County Auditor and are not online. The FindaGrave website has no record of William’s burial, either.)  Mary was a first cousin to Bertha, and had grown up in Issaquah.  She was in Ellensburg during 1903-1904 because she was a student at the normal school.  She sent Bertha four letters during that time. While in town, she visited back and forth to her Uncle Peter’s house and wrote letters for him and his wife.  As she wrote on October 5, 1903, “Uncle Peter wants me to tell you that he feels ashamed for not getting your letters answered but you know he can’t write and Aunt Sarah doesn’t get around to even answer her own letters, she gets me to write one every time I’m out there. Uncle Peter said that when Willie was living he used to get him to write once in a while but now since he’s dead he says he doesn’t get to write to you at all. He’s been wanting me to write for him but hasn’t got around to it yet.”  In December of 1903, it fell to her to communicate cousin Helena Christopher’s death to the wider family.  She wrote to Bertha, “I suppose you’ve heard about Lena’s death.  All I’ve been doing the last two days is ‘phoning and telegraphing. Oscar ‘phoned to me and then I had to go out to Auntie’s.”1  The following February, she reported that Uncle Peter was having to spend nine weeks flat on his back in bed.  Meanwhile, she was socializing but had been stood up on the night of a dance.

Previous: What Bertha’s Correspondence Tells Us