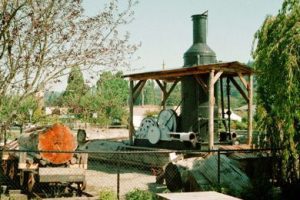 The logging display at the City of Issaquah’s “Preservation Park” was created over the course of the 1990’s by many volunteers, and is maintained by the Issaquah Historical Society.

At the center of the display is a “road engine”, which were used throughout the area in the late 1800’s and early 1900’s to skid logs long distances (up to a mile!) toward a pole at which they would be loaded on trucks or rail cars.  The engines were commonly called “donkey engines”  because they did work that had previously been done by animals, such as mules and oxen.

The road engine displayed was discovered in 1987 by former Issaquah Historical Society chairman Greg Spranger and then-councilman Rowan Hinds on Weyerhaeuser land southeast of Enumclaw. Extracting it from the surrounding forest and bringing it to Issaquah was a major effort – which took four years.  The engine was built somewhere between 1895 and 1910 by Puget Sound Iron and Steel Works in Tacoma.