Larry Kangas painted this logging mural based on several photos from the Issaquah History Museums’ collection.

This 1998 mural depicts Issaquah’s logging industry circa 1900-1940. At this time, old growth cedar and fir logs were being cut from the hills surrounding Issaquah and milled in the town’s many lumber mills. There were a number of railroad spurs that made transport of lumber into town easier. The trees growing on the hills today are second and third growth.

Prior to 1960, Sunset Way was known as Mill Street, referring to mills that were located on either end of the street when the town was first incorporated in 1892. 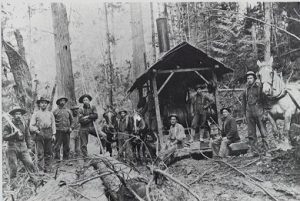 Larry Kangas drew inspiration from this photograph of a logging crew with steam donkey. (IHM 91-7-56)

One of the original source photos used in the design of the mural.  According to Eric Erickson:  “The photo is of the Issaquah Mill Company’s yarding engine and logging crew taken in 1903 in the vicinity of what is now Overdale Park. People in photo are William Robert (Tap) Bush with beard in background at base of large tree, Ralph Darst holding two horses, Charlie Baxter in white shirt seated on donkey, Dave Hailstone holding white horse. The steam donkey was built by Washington Iron Works in Seattle and is a two drum yarder with 9 by 10 1/4 inch cylinders, manufactured on February 10, 1903, builders #632”.

Larry Kangas as work on the logging mural.

Larry Kangas in front of his work.