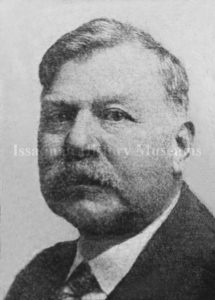 Peter J. Smith was born in Illinois in 1848. He married Josephine Laird around 1872. By 1875, the couple had made their way to Seattle. In 1876 they were living in the Squak Valley, where Smith purchased property and established a dairy farm. His wife died in 1908, and Smith began a new chapter in his life, remarrying a young Swedish girl named Selma Johnson. Selma was nearly 40 years younger than her husband. Together they had one daughter, Helen Smith.

Smith was appointed the first State Dairy Commissioner in 1895. He also served as Issaquah’s mayor between 1913 and 1915, and again between 1918 and 1920. It is not known precisely when he became the Town Marshal, but it is likely he held this post on an interim basis. He would have been in his early 70s at that time. Smith tendered his resignation as Town Marshal in June of 1920, to be effective July 1. Several weeks after he gave his notice, the council and mayor met for a special meeting. The minutes show that the council had determined that it was not possible to appoint a Town Marshal who would accept the current salary of $90 a month. As a result, the council raised the salary to $125 a month. At the following council meeting, Jack Chalfa submitted his first marshal’s report.

Jack Chalfa was Town Marshal under the administration of Mayor W.E. Gibson, following the resignation of P.J. Smith in June 1920. After Smith’s resignation, the Town Council had difficulty finding a replacement for the advertised wage of $90 a month. The wage was subsequently raised to $125. The Issaquah Press noted in its July 3, 1920 issues, “P. J. Smith having resigned as marshal effective Wednesday evening, Mayor Gibson appointed Mr. Jack Chalfa to that office. Jack is an Issaquah boy, did his big bit during the war, and his appointment meets with the approval of the public.”

Jack Chalfa was born on May 27, 1891 in Homestead, Pennsylvania. His parents were Austiran immigrants. He was living in McKeesport, PA at the time he registered for the WWI draft, bud haf moved to Taylor, WA by 1918. In February of 1918, he married a miner’s daughter named Mary Pedro. Later that year he enlisted and served active duty in the US Army. After he returned from the war, he and his wife had three children: Jack, Jr., born in 1924, and twin daughters Donna and Dulcie, born in 1927. Jack worked as a coal miner, and was also a sawmill worker for Wyerhaeuser for many years at Snoqualimie Falls. Jack died in 1980. 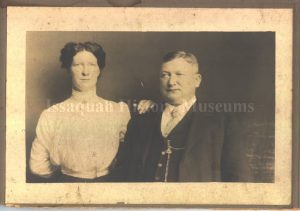 Burnett was born in 1871 in Pennsylvania. He married Nellie Thompson, a native of Iowa. Her parents were from Scotland. His father was originally from Ireland and his mother came from Scotland.

He operated the Klondike Bar in town and the 1910 census lists him as a “salon keeper.” He later served as a Town Councilman. 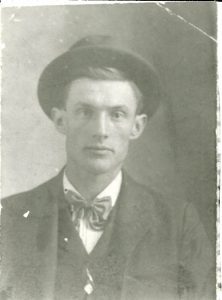 Elmer Baxter was born in Illinois in 1867. Along with his parents, Sylvanus and Elizabeth Baxter, he came to the Issaquah Valley in 1888. Baxter never married and had no children. Just prior to his tenure as town marshal, Baxter worked as a guard in the Washington State Penitentiary in Walla Walla, Washington. In later life, Elmer lived in Renton, Washington, where he died in 1930. 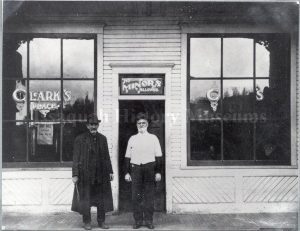 J. Howard Case and George Clark in front of Clar’s Place, one of Issaquah’s many saloons. (IHM 91-7-1)

J. Howard Case was born in May, 1852 in Pennsylvania. His parents came from England. His wife, Matilda, was originally from Iowa and her parents were from Norway. The couple married around 1888. Their eldest child, Pearl Case, was born in Minnesota, and their second (Robert E.) was born in the Dakotas. Sometimes between Robert’s birth in 1885 and 1890, the family moved to Washington, State.Bertrant Case was born in that state in 1892.

Howard served as Town Marshal from 1902 to 1903 and again from 1908 to 1913. Much of the information during the periods 1902 to 1909 is yet to be uncovered, but from 1910 to 1913 the record is more clear. Issaquah at the time was primarily a logging and mining town. Nearby Monohon and the surrounding areas were also given to like industry. The 1910 census recorded Issaquah’s population as 628 (although this didn’t take into account nearly 200 people that lived on the outskirts of Issaquah proper.). North Bend’s population was 229, Snoqualmie, 279.

Issaquah had at least eight saloons going at any one time, and the ingestion of spirits, by a mainly male contingent from these towns, kept Howard busy.

On June 30, 1910, one Fred Davis became so intoxicated that he lay down to sleep on the Northern Pacific tracks at the Bush Street siding. Unfortunately for him, a train came along and sent poor Fred to his maker. Marshal Case had the grisly duty of trying to identify the man and attempt notifying his next of kin.

Another incident earlier in June, involved Dominick Geri age 22. It seems he stole a horse and rig belonging to a Mr. Whipple. He was seen the next day on the streets of town, and Marshal Case, “Extended to him a pressing invitation to enjoy his hospitality” (in the jail no doubt). Geri was taken before Judge Talmadge for a hearing and then was taken to the King County Jail as he could not post the $1,000 bail.

A more serious incident occurred on September 23, 1910 that could have proved fatal for Howard. The Seattle-Tacoma Power Company had sent a non-union electrician to do some work in the Issaquah area. The power company had arranged for two Special Commission Deputy Sheriff’s to accompany the worker as a precaution.

While drinking at the bar in the Bellevue Hotel, one of the Deputies by the name of William Pyncheon started a disturbance most likely due to his alcohol intake. Marshal Case was called, and when he arrived Pyncheon pulled out a gun. After a brief struggle, Pyncheon was disarmed and ended up in front of a judge where he pled guilty to a disorderly conduct charge. This so impressed the judge that he dismissed the additional charge of using obscene language on the street! Pyncheon was fined court costs and was released undoubtedly to explain his misconduct to his boss, the Sheriff of King County.

Burglary seemed to be a problem then as it is today. On Mar 18, 1911, the J. J. Lewis Hardware Store was broken into by breaking the glass paneled front door. Three revolvers and a small amount of change were taken.

The jail was not immune from break in or breakouts as well. On August 26, 1911, it was broken into and two young men locked away for disorderly conduct made a quick escape with the aid of their accomplices.

An interesting note was that in November, 1910, the Town Council approved a pay raise for the Marshal to $60.00 per month. The news article doesn’t say what the salary was before the raise.

The Mayor in 1910 was Frank Day; City Clerk was W.E. Holland; the Justice of the Peace was John Drylie; and Burnett Mullarkey was on the Town Council. Drylie also served as Marshal from 1906 to 1908 and Mullarky was Marshal from 1917 to 1920. 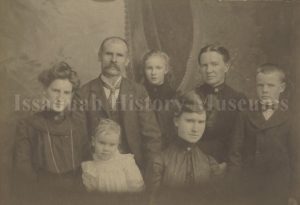 John Drylie served as town marshal from 1906 until 1908. Before and after his tenure as marshal, Drylie worked as a coal miner. Sometime between after 1910, Drylie changed professions. In 1920, Drylie, age 67, was working as a road foreman during the construction of the Sunset Highway.

Charles Alexander Cameron was born Aug 25, 1866 in the state of Maine.

Charles Cameron left office at the end of his term in 1902 and moved to Lewis County sometime thereafter. The November 25, 1910 edition of the Issaquah newspaper states, “Chas. Cameron, formerly Marshal, was a visitor here the first of the week. Mr. Cameron is now a guard of state convicts at a rock quarry in Lewis Co. where about 50 convicts are employed in producing material for highways”.

He died Nov 11, 1950 and is buried at Woodlawn Cemetery in Ferndale, Whatcom County.

Joe Mason was born in March 1875 in Michigan. His parents were both immigrants from Ireland. By 1878, his parents had relocated the family to Washington, where Mason lived out the rest of his life.

On June 4, 1899, Mason married Emma Mullarkey. Emma was born in Oregon in February 1876, and was also the child of Irish immigrants. Emma’s brother, salloon-owner Burnett Mullarky, also served as Issaquah Marshal. Mason worked as a coal miner for a time and between 1900 and 1902 he put on the Marshals’ badge. According to Town Ordinance Number 56, enacted in February 1900, his pay was $60.00 per month.

The old wooden town jail, long since knocked down, was renovated in January 1900. The Issaquah Independent had this to say. “The City Bastille has been renovated the past week both inside and out. Instead of a leaky flat roof, a new pitched roof adorns the building and it assumes metropolitan airs.”

At the time of Mason’s tenure as marshal, the population in the Gilman voting precinct was 1,060. In August 1900, the first telephone company was organized and by January 1901 there were two subscribers. Area mines, with a monthly payroll of around $30,000, employed 500 men.

In 1902, Mason joined the Seattle Police Department and served with distinction. In 1919,  a piece in the Issaquah Press noted that he had been promoted to the rank of Captain. He died in Seattle on April 14, 1929, at the age of 54. 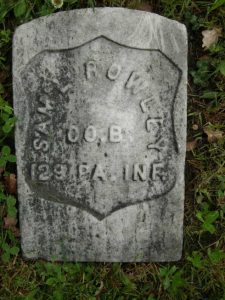 Samuel Rowley was born on January 7, 1830 in Dudley, Staffordshire, England. He married Alice Nicholson circa 1850. Rowley moved to the United States in 1851, and then reportedly returned to England. In 1860 he returned to the USA, where his wife and three children (Ben, Elisa and Anne) joined him in 1861. They settled first in Pennsylvania. They were still living there when the Civil War broke out. Rowley enlisted in the army, and served with Company B, 129th Pennsylvania Infantry during the Civil War. Between 1865 and 1885, the family lived in Keokuk, Iowa. Rowley worked as a miner in this area. During this time, five more children were born to the Rowleys: Cornelius, Samuel, Edward, Happy and Harriet.

It is not known precisely when Samuel Rowley moved to Washington State. He was appointed Town Marshal of Issaquah in September 1899, when Thomas Crossley ended his term early. Rowley would have been 69 years old at that time. It was a brief tenure; in January of 1900, Joseph Mason was elected to the post. At the time of the 1900 census, Rowley was living in Seattle. In 1910, he was living at the Soldier’s Home in Orting, Washington. He died on March 12, 1912, at the age of 81. He is buried at the Grand Army of the Republic (GAR) Cemetery in Seattle.

Beebe appears in the 1892 Washington State Territorial census. At that time, he was living in Gilman with his young wife Ada Sloper Beebe, and their one-year-old son Henry. The census shows that he was born in the United States in about 1867, and that he was working as a laborer. The Washington State Digital Archives contain copies of the certificate he signed upon his 1882 marriage to Ada, and another marriage license for his marriage to Sula Turner in 1893.  And this is the extent of the information we have been able to locate about Mr. Henry Beebe.

It’s likely that Beebe was not the only man to serve as a “substitute” town marshal during the absence of one of the town’s official marshals, at least while the town had a one-man peace-keeping force.

Back to Law Enforcement