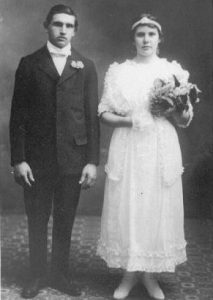 Ed Seil was born August 25, 1897 in Issaquah. His parents were Adam Edward and Ellen Price Seil. His Grandfather was originally from Belgium and his Grandmother was from Wales.

Ed, who’s nickname was Nogs, spent his early years on the family ranch, a thirty-two acre spread on Tiger Mountain that had been settled in 1887 by his Grandfather, Ben Price. The ranch possessed over one thousand chickens, numerous pigs, five milk-cows, a horse, extensive gardens and a large hay production capability.

The ranch house was a busy affair. Ed, and sons; Walter Wood, Rex Price, William Edward, Jack Raymond, Leonard, Chester George, and sisters; Keturah Ellen and Mabel Gertrud, shared the place with Mom and Dad and a couple of boarders!

Ed started school at the Pickering Hill School, and finished at the Taylor School in Taylor. He started working at an early age, and even tried his hand as a type setter for the Seattle Post Intelligencer newspaper. During World War I his draft lottery number came up, but luckily the war ended before he was called to active duty.

On April 27, 1917, Ed married Josephine Elmira Wood at the Odd Fellows Hall. She was born May 27, 1901 in Ponka, Nebraska. When she was two weeks old, she and her family moved to Monohon, (a community then located near present day SE. 32nd St and East Lake Sammamish Parkway SE.). In the 1930’s and early 40’s, Ed worked as a contract “Gypo” logger near Greenwater.

As Town Marshal, Ed had a great rapport with citizens and law-breakers alike. More often than not, he would lock up minor offenders, feed them breakfast, and turn them loose after a stern lecture concerning their transgression. On one occasion he had to fire his revolver into the headlight of an oncoming car, driven by a drunk 17 year-old. The car came to a stop and the driver was arrested without incident. On July 9, 1951 Ed was offered the job as Town Marshal by then Mayor Castagno, which Ed accepted. His pay at that time was $350.50 per month! Jack, Ed’s son, assisted as Deputy Marshal for some time. It appears that Jack Allen, and Tom Crossley also acted as Deputies at some point during Ed’s term of office.

Ed also solved case involving a burglary from an Issaquah jewelry store. While on patrol, he ran across a juvenile that was wearing five watches! Thinking this odd, Ed questioned the lad who confessed to his participation in the burglary. Ed also caught another burglar at Tony and Johnnie’s Market, which at the time was across from the Eagle’s Club on Front Street North. Ed took the sixteen year-old boy to his father and explained the situation, and the father reportedly “took matters in hand.” This was an era when corporal punishment for naughty children was expected..

On November 1, 1955, Ed was replaced as Marshal by Elmo Hudgens. Ed then went to work for the Public Works Department of Issaquah. He retired as Superintendent in 1965, with a combined total of twenty-two years service to the city.

Ed was an avid baseball player and fan. From 1915 to 1927 he was a member of an organized team and played with Jack Favini, Bill Chammer, Bert Hoyie and others. Fraternally, he was associated with The Eagles Lodge, Aerie #3054.

Ed passed away on October 13, 1975 and Josephine, his wife of fifty-three years, died on February 16, 1971. They are both laid to rest at Hillside Cemetery.

A special thanks to Walt and Olga Seil for providing much of this information on this man who “Kept the Peace” in a town that meant so much to him.