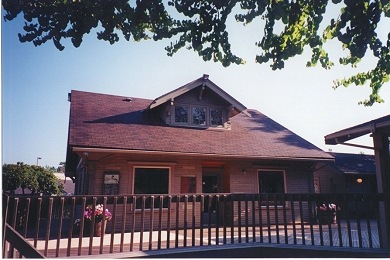 Jake Jones constructed this farmhouse for in-laws in 1913. They farmed the surrounding area until 1940 when the completion of the first Seattle-Mercer Island floating bridge introduced the four-lane era to the Issaquah Valley. In the process, the Livingstone farm was bisected, making farming a losing proposition. The house was moved to a three-acre section where it remained until 1972 when it was moved back another 12 feet to allow for the positioning of the two Anderson homes and the Trigg House as the core of Gilman Village.