This is the background of James W. Bush from Clarence Bagley’s History of King County Volume III pages 856-858. As of 2002, members of the Bush family continue to reside on parts of the family’s homestead, east of today’s Pickering Place shopping center. 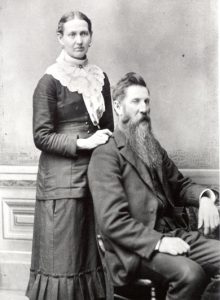 The old pioneers who, having finished their tasks, have passed on to higher scenes of action, seldom receive the measure of credit which they deserve from the present generation for the splendid work which they accomplished. It required courage and stamina of a high order to enter a new country and there wrest from the primeval forest a farm and create a home, and thus contribute to the foundation of the present civilization.

James and Martha Bush.
Among the pioneers of King County was numbered James W. Bush, who was one of the first settlers in Squak Valley, coming at a time when it was literally a jungle, the haunt of wild animals and frequented by hostile Indians. He was a man of mettle, however, and in the course of time realized a commensurate reward in the splendid homestead which he created and in the gratitude and appreciation of his children.

Mr. Bush was born in Tioga County, Pennsylvania, in 1825 and was the son of William and Rebecca (Hotchkiss) Bush, also a native of Pennsylvania. His father was a farmer and on his land the first oil in Pennsylvania was discovered.

When James W. Bush was a small child the family moved to Erie County, New York, where in the public schools he obtained his education. When seventeen years of age he started out to make his own way in the world and went to Buffalo, New York. Later he went to New Orleans, Louisiana, and was there employed in cutting cordwood for Mississippi river steamers. At the outbreak of the Mexican war he enlisted and served until its close, for which he received from the government a land warrant. He took a land grant where now stands the city of Chicago, but later relinquished it. In 1850 he crossed the plains to California, traveling with a horse team and covered wagon, and there engaged in gold mining. After a few years search for the yellow metal, he went overland to Lind County, Oregon, in 1852, where he engaged in farming until 1859, when he went to Seattle. Soon afterward he bought land at Georgetown, on the Duwamish River, in what is now part of Seattle, and there followed farming until May 4, 1864, when he sold the place and came to Squak valley, where he traded a yoke of oxen for one hundred and sixty acres of land. One acre was cleared and had on it a small log cabin, which he occupied a few years, and then built a good log house. He devoted his efforts closely to clearing his land, a task of no mean size, and also worked in the logging camps on Puget Sound during the summers. In the course of time his entire farm was cleared and developed into a good, productive homestead, and there he spent his remaining years, his death occurring in 1894.

In 1854, at Lind County, Oregon, Mr. Bush was united in marriage to Miss Martha Stewart, a native of Indiana, whose death occurred in April, 1922. They had six children, namely:

Mrs. Mary S. Prue, who was born in Lind County, Oregon and whose husband is a native of Rhode Island, has three children, Mrs. Bertha Baxter, Mrs. Edna Anderson and Edgar.

Andrew Jackson, who was born in Oregon and now lives at Falls City, Washington, is the father of three children, Leroy, Mrs. Elva Pauley and Phillip.

James W. Bush was a man of public spirit, who took a deep interest in everything affecting the progress and prosperity of his section of the county, and rendered effective and appreciated service as a member of the Board of County Commissioners for three years, and as road supervisor for several years.

He was a member of the Pioneers Association of Washington, and was regarded as one the representative men of his community, commanding the uniform confidence and respect of his fellowmen, who esteemed him for his genuine worth as man and citizen. His son William Robert Bush, is an prominent and active member of the Grange in this county and was the organizer of the Grange at Issaquah in 1913, serving as master of that society.

The old homestead is still nearly all owned by the Bush family, the most of whose members are living in the vicinity. They are worthily sustaining the prestige of the family name and are numbered among the loyal and progressive citizens of King County.

From History Of King County, Washington by Clarence B. Bagley, publised by The S. J. Clarke Publishing Company, Chicago–Seattle, 1929.Now in Public Domain. This material was typed and submitted to the web site by Eric Erickson
Added January 15, 2002