This is the background of Martin Monohon from Clarence Bagley’s History of King County Volume II pages 866, 869 and 870. Monohon is the namesake of the lumber milling community that thrived on the eastern shore of Lake Sammamish for many years. 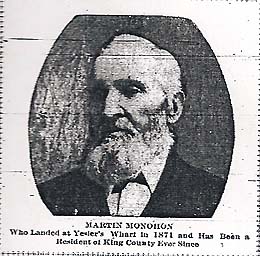 Martin and Isabella ( Speer ) Monohon, the former a native of Crawford County, Indiana, while the latter was born in that part of Allegheny County, Pennsylvania, in which the City of Pittsburgh is now situated.

Martin Monohon went to Iowa in 1847 and was married in Des Moines, that state. For about five years he was the proprietor of a livery stable in that city, then called Fort Des Moines. In 1852 he sold most of his horses, keeping four of the best, and also retaining some of the strongest wagons. Thus well outfitted he started on the long and arduous journey to the Oregon country. Mr. Monohon went over the old Barlow route and endured many hardships and privations while crossing the plains but arrived safely at his destination. Locating near Roseburg, in Douglas County, he filed a donation claim of six hundred and forty acres, consisting of timber and prairie land, and he cleared and developed the place, which was devoted to general farming and stock raising. During the ’50s he volunteered for service in the Rouge River Indian war in southern Oregon, in which his brothers-in-law, James and William Speer, also fought as volunteers.

During the ’50s Mr. Monohon carried the United States mail from Roseburg, Oregon to Eureka, California, and had to ward off many Indian attacks while engaged in that hazardous occupation. In 1863 he sold the ranch in Douglas County, Oregon and went to Idaho, where he engaged in mining and also conducted a livery stable in Silver City. In 1866 he located his family in Oregon City so the children could attend schools there.

In 1871 he brought them to Seattle, making the trip on the steamer Gussie Telfair. For a few years he cultivated leased land in the vicinity of Georgetown, King County and from there removed to the McGilvra place at the end of Madison Street on Lake Washington.

In 1877 he took up a homestead of one hundred and sixty acres near Issaquah in this county, and built thereon a log house. He then applied himself to the strenuous task of removing the heavy timber from his place, clearing most of the ranch, and he devoted his attention chiefly to the raising of stock, spending the remainder of his life on the farm.

He represented Douglas County in the first state legislature of Oregon; was a member of the school board for several years and served as road supervisor, ably discharging the duties of those offices. His upright, useful life was terminated in 1914, and Mrs. Monohon passed away in 1911. They were the parents of six children: Mrs. Asenath Baunton, who is survived by four children, Charlotte. Robert, and Ernest and Harold, twins living in Seattle; Augustus, also deceased; Mrs. Emma Brown, a resident of Renton; Lee; Cassius, who has passed away; and Frank Lincoln, of Renton.

From History Of King County, Washington by Clarence B. Bagley, publised by The S. J. Clarke Publishing Company, Chicago–Seattle, 1929.Now in Public Domain. This material was typed and submitted to the web site by Eric Erickson
Added June 10, 2000