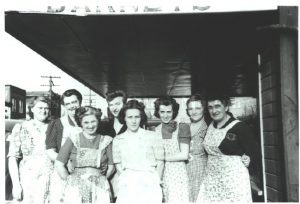 After the United States entered World War II on December 7, 1941, many of Issaquah’s young men left town to serve in the military. Women stayed behind to tend victory gardens, run family businesses, volunteer as airplane spotters at the Issaquah Volunteer Fire Department Hall – and to serve in roles traditionally reserved for men. Women’s roles during World War II were significant and diverse.

Many women played an important role in the war effort by taking the jobs vacated by men who went overseas. More than six million women worked in defense plants and offices. Many from Issaquah and the surrounding area found wartime employment at the Boeing Company. Among them were Jo Garner, Helen Hailstone and Betty Brault. Betty worked as a riveter on airplane wings. Viola White Petersen remembers, “After graduation from high school, I got a job as a mechanic at Boeing Aircraft. There were lots of women working in war plants but, considering my mechanical skills and for the good of the country, that fall I left to go to school at the University of Washington.”

Daughters as well as sons joined the military and died in service to their country. During World War II, more than 350,000 women served in women’s divisions of the military, among them several of Issaquah’s young women.

Juanita Risdon joined the WAVES (Women Accepted for Volunteer Emergency Service), the women’s division of the Navy. WAVES worked stateside so that Navy men were free to fight overseas. In addition to traditionally female secretarial and clerical jobs, WAVES were also assigned to other duties including aviation, intelligence, and communications.

Agda Peltola, daughter of Herman Peltola, joined the SPARS. This women’s reserve of the Coast Guard took its name from the Coast Guard’s motto, Semper Paratus (“always ready”). Lynnette McDonald joined the Women’s Army Corps, and her progress through basic training was recorded in several issues of the 1944 Issaquah Press.

Elizabeth Erickson joined the Woman Air Force Service Pilots (WASP). These women received extensive flight training and relieved men of their non-combat duties. Among other things, they ferried new fighter planes to Europe so that fighting men would not have to leave the front lines to do so. This proved to be an appealing vocation for young women whose early years were filled with news coverage of Amelia Earhart’s daring flights – and eventual disappearance.

Erickson, a graduate of Issaquah High School and the University of Washington, reported for duty at Sweetwater, Texas in January of 1944. Tragically, four months later she was killed in a mid-air collision over Texas. Thirty-seven other women died in service to their country, but never received military recognition. Because they are still considered civilians, the U.S. Army did not even provide military burial. Erickson’s name is inscribed on the monument to Issaquah’s war dead that stands in Memorial Field.

World War II brought around changes in the typical roles of women. Issaquah’s women, like their sisters across the nation, took the opportunity to serve their country in new ways.

This information came from research done in preparation for the newest IHS exhibit, Issaquah in Wartime. The exhibit opeed at the Gilman Town Hall on July 4 and closed November 11, 2003. The article was published in the the Summer 2003 edition of Past Times