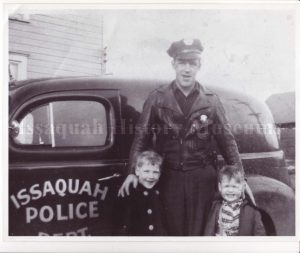 Ray Robertson with his daughter and son, standing in front of his official police vehicle. (IHM 72-21-14-21)

Ray took over as Marshal in 1949. Jack Allen and Tom Crossley were his Deputies at some point.

While Ray was in office, the Town Council contracted with Stonebridge Chevrolet to acquire the town’s first police car.  Over $1,000 was allocated for the vehicle, but after five months the contract was voided for non-delivery, and a second hand panel truck was bought from the State Patrol for $600.00.  It seems strange today that a panel truck would serve as a police vehicle, but in those days it was not so unusual.

Law enforcement officers were usually the first on the scene of accidents and fires, so they often equipped their rigs with first aid supplies, auto repair equipment and odds and ends. This particular vehicle was well suited for it’s role “Out  East”.

On August 5, 1950 Wold and Lewis Hardware Stores were struck. A thirteen and fourteen year old boy were arrested after taking merchandise from both places. Interestingly enough, Ray had been patrolling the area in the early hours of that morning and was checking Wold’s Hardware when someone struck him from behind, knocking him unconscious. Whether it was one of the boys who assaulted Ray is not clear.

The Town Council enacted Ordinance No. 65 to combat the problem. It required all persons under the age of 16 to be off of the street by 9 P.M!  The council also approved an annual “police” budget of $4,760. It is around this time that the name “Police” seems to have been noted in council and newspaper accounts of the Marshal’s office.

Ray was a kind soul and an example was his act of kindness on November 8, 1949. A young ex-GI was seen hitch-hiking through town that night, with a small baby bundled up in his arms. Ray stopped to investigate, and the young man asked to be housed in the town jail over night. Ray obliged and made sure that a good fire was going in the jail stove to keep the pair comfortable. In the morning took them home for breakfast and learned they were headed for Reardon near Spokane. The young man’s wife had abandoned them on the way from Los Angeles and was no where to be found.