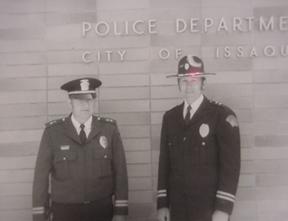 Ron Prosise was born on June 11, 1935 in Nebraska and raised in Klamath Falls, Oregon. He attended school there and in 1954 he joined the Army.

Ron served with the 101st Airborne Division as a Communications Sergeant.  After leaving the service he went on to attend Contra Costa Junior College in Concord, CA where he obtained an A. A. Degree in Criminal Justice in 1967.

Ron entered law enforcement in 1961 as a Police Officer with the Richmond (CA) Police Department, one year as an Identification Technician, and four years as a Patrol Officer.

Since he lived in Concord at the time, Ron decided to join that city’s police force in 1965. Concord PD had 150 sworn officers back then and it gave Ron the opportunity to work in several divisions including patrol, traffic, investigations and administration. In 1970 Ron was recruited to become the Police Chief of Yreka, CA where he was employed until 1971.

It was that year that Ron became the Police Chief of Issaquah. During Ron’s tenure, the Law Enforcement Assistance Administration was beginning to open doors for smaller departments with grants for equipment and training. Taking advantage of the opportunity, Ron acquired the department’s first computer, which was linked to the National Crime Information Center (NCIC). 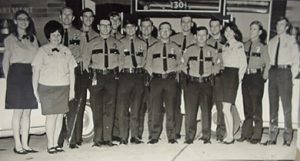 Ron Prosise is third from left in this photo of the Issaquah Police Department, circa 1970.

Ron also equipped the force with radar and portable video equipment. Officer training became a priority and each officer was encouraged to attend college courses.

During this period, Ron complied the first formal set of Rules and Regulations and instituted a new records division.  Prior to the acquisition of computers, records typed all reports on typewriter, which was a long and laborious process.

The department was housed in it’s own building behind City Hall. The station included a four-cell jail, which held prisoners from Snoqualmie, North Bend and the State Patrol.

To give an idea of how things were back then, Highway 10 (The Sunset Highway) was the main east/west route from eastern Washington to Seattle. (Interstate 90 was still under construction at that time). When a McDonald’s franchise opened in town, everyone said, “They must know something we don’t”, meaning that growth must be on the horizon.

Ron attended the University of Puget Sound from 1971 to 1973 during the evenings where he graduated with a B.A. in Public Administration.

In April 1976 Ron left the department to begin a new career as the owner of a residential construction company that served the Puget Sound and Wenatchee Valley areas. He and his wife, Ruth retired in 2000 and spends his winters in Palm Springs, CA and the summers in Wenatchee. They have four children.

Looking back: Front Street Looking North – circa 1911
Scroll to top