Published in the Issaquah Press on January 10, 2001 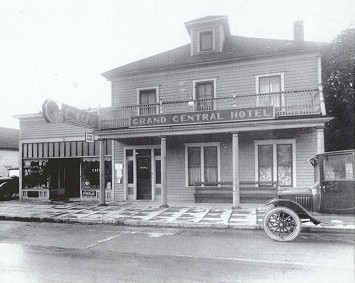 In this early 1924 photo, more changes have been made to the front of the Grand Central Hotel. New wider windows were installed, the entrance door has been moved to the left side, and the hotel sign has been moved back to the marquee rail. A cafe addition has been added to the left side of the hotel by Joseph Alfred Marion, who purchased the hotel from the Crostons on Oct. 26, 1920. Mill street in front of the hotel, now East Sunset Way, has been paved with concrete. The wooden side walk is in the process of being replaced with concrete. It was completed prior to Labor Day 1924.

Looking back: Grand Central Hotel – Circa 1930

Looking back: Grand Central Hotel – Circa 1910
Scroll to top