Published in the Issaquah Press on January 24, 2001 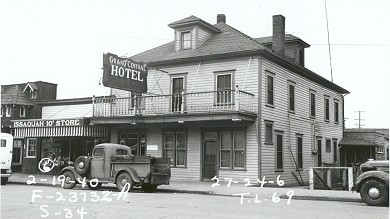 This 1940 photo shows that the cafe had become the “Issaquah 10¢ Store.” At this time, the facade of the current “Rolling Log” tavern had been constructed to the west (left) of the hotel, but the tavern had not yet been expanded to take over part of the hotel building. (Photo courtesy of Denny Croston – Originally from Tax Records)

As part of a King County Assessor’s Office program, all buildings in the county were photographed in the late 1930’s and early 1940’s. In this photograph, taken Feb. 19, 1940, more changes to the hotel have occurred. An additional door has been added next to the right side windows, the porch posts have been removed and replaced with rods anchoring the marquee to the top of the buildings, the cafe is now Issaquah 10 cent Store and the log tavern has been built along side of the dime store. A new sign also advertises the hotel. The hotel building now contains 25 rooms, three sinks, three bath tubs on legs and six toilets.

From the Digital Collections: Back to School!

Looking back: Grand Central Hotel – Circa 1930
Scroll to top