Published in the Issaquah Press on February 14, 2001 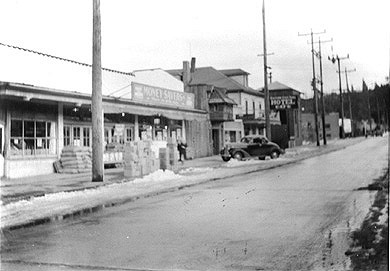 As we leave the last series about the Grand Central Hotel we will take one last look at the north side of Mill Street, now the 040 block of East Sunset Way.

In this late 1930’s winter scene, ice and snow as well as sacked and boxed goods are stacked on the sidewalk in front of the Money Saver’s Grocery Store (now Mandarin Garden Restaurant). Continuing to the right in the photo are the Log Tavern, Grand Central Hotel & Cafe, Puget Sound Power & Light substation.

Centered behind the double set of power poles is the New Issaquah Town Hall, completed in 1930 and demolished in 1996 to make way for the new Police Building.

Looking back: Grand Central Hotel – circa 1970
Scroll to top