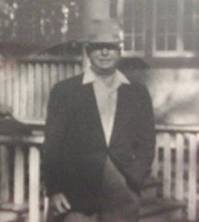 William Mitchell, who served as both Mayor and Town Marshal of Issaquah.

William C. Mitchell was born in England in 1889. At the age of 20 he immigrated to the United States, and within a few years had married another English immigrant named Beatrice Mary Cobbeldich. The couple lived in Montana, where their three children Edith, Beatrice, and Roslyn were born. Circa 1918, he was working as the shift boss at Pittsmont Mine, in Butte, Montana.

By 1923, the Mitchell family had moved to Issaquah, where William C. Mitchell served as town marshal. Their youngest child Marion was born in Issaquah in 1924. Beatrice Mitchell died in 1929.

In 1930, Mitchell was employed driving a road grader, most likely employed by the County in the construction of Sunset Highway.

Major crime during this period consisted primarily of burglaries to both home and business. On December 12, 1923 the Grange Mercantile Store was broken into after the front door was pried open. Clothing in boys sizes were taken, as well as a considerable amount of other merchandise including candy and cigarettes. The store posted a $100.00 reward for the capture of the culprits.

On December 20, 1923 burglars again struck. This time the Alexander Blacksmith Shop was the victim. Around $10.00 in tools were taken. These amounts may seem trivial in today’s money, but when you consider that a 1923 Ford Touring Car cost $295.00, it puts the value of a 1923-dollar into perspective.

Things got so bad that the Town Council met that same month and considered radical changes of the Marshal’s duties. A proposal was made to abolish the Marshal’s Office and make him a night watchman instead. The town newspaper reported, “Some places are arranging to have an armed watchman sleep in their buildings, and a cold shower of lead would prove a wonderful argument at that”!

During Mitchell’s tenure the Sunset Highway from Seattle to Preston was completed in October of 1923.  The road was graded and graveled, but wouldn’t be asphalt paved until many years later. That same year the Department of Motor Vehicles required that all cars carry a receipt verifying that the vehicle’s headlights had been tested and were in state compliance. It made no mention if any other safety inspection was required.

During the 1920’s Scarlet Fever made an appearance in Issaquah and resulted in several families being quarantined to prevent it from it from spreading. Several youngsters died during this time.